Germany and from countries across Europe!

Major exhibition and scholarly loans from the

From 14 December 2007 to 9 September 2008, the two original Belgian and Italian posters of the propaganda film Jud Süß (1941, Germany) were on display at the special exhibit entitled "Jud Süß - Propagandafilm im NS-Staat" at the Haus der Geschichte, Baden-Württemburg, Stuttgart, Germany, along with other related film items borrowed from the Gillespie Collection. The 152-page catalogue of this important exhibition was published by Das Haus der Geschichte (ISBN 978-3-933726-24-7) and all film posters and materials loaned by this Collection were reproduced in the catalogue.

In 2007 the Macmillan book entitled CINEMA AND THE SWASTIKA, co-authored by renowned film historians Roel Vande Winkel and David Welch, used the Belgian poster as illustration of the use of German propaganda films in Occupied Belguim in WWII. Original poster images from this website are also, by arrangement with the F.W. Murnau Stiftung, in Wiesbaden, Germany, held on their own website.

In mid-2009, the original German film poster ( 'Muster 1' ) for the anti-British film OHM KRÜGER, was reproduced in the book STATE OF DECEPTION: THE POWER OF NAZI PROPAGANDA, W.W.Norton & Company, New York, N.Y. by permission of the Gillespie Collection. The poster was reproduced in full colour on the first page of the book chapter entitled 'Feature Films as Propaganda.'

In late 2010, the book UFA IN FARBE - Technik, Politik und Starkult zwischen 1936 und 1945, Collection Rolf Heyne, München, by authors Friedemann Beyer, Gert Koshofer and Michael Krüger, reproduced a number of items from this Collection, including three different countries' posters for MÜNCHHAUSEN, and one each for DIE GOLDENE STADT and for DIE FRAU MEINE TRÄUME.

In August 2012, the long–anticipated biography on actor Emil Jannings by Frank Noack reprinted and credited from this Collection one of the two German posters for Ohm Krüger.

In early 2014, the new Felix Moeller documentary on National Socialist film, Verbotene Film, borrowed images of  Jud Süß posters and other related film materials from this Collection. The documentary was released in October 2014, although the posters were in the end, not shown in the final version of the film.

In June, 2014, a film conference in Moscow entitled "Soviet studios at war, 1939-1949" took place and Dr. Ralf Forster, whose research on the Zentralfilmgesellschaft Ost (ZFO) and its production companies, such as Riga-Film and Ukraine-Film (see Ostland Film on this website) used the  Collection's very rare Riga poster for Das Sündige Dorf  in his conference presentation.

In July 2014 Aisthesis Verlag, Bielefeld published the book THE PLACE OF POLITICS IN GERMAN FILM,  with a chapter on Karl Ritter's Capriccio (1937) using information from the Collection, drawing on the personal film clipping Capriccio album of Karl Ritter and other materials. (Chapter 4, by Valerie Weinstein, "Third Reich Film Comedy as a Place of Politics: Masculinity, Marriage, and Mayhem in Karl Ritter's Capriccio," pp. 85–104).

The English translation of Frank Noack's pioneering 2000 work,  Veit Harlan  – "Des Teufels Regisseur, "  published by The University Press of Kentucvky as Veit Harlan – The Life and Works of a Nazi Filmmaker in 2016, includes quotations from our 2nd edition Karl Ritter book concerning the actor ( and  Luftwaffe pilot)  Hannes Stelzer, who appeared in Harlan's Der Herrscher film (1937).

The Historical Journal of Film, Radio & Television (HJFR&T), Issue 2 of 2016 (Vol. 36) has an article by Tobias Hochscherf and Roel Vande Winkel entitled "Third Reich Cinema and Film Theory."  In the acknowledgements, we are thanked  "for kindly offering access to hard to find sources."  No problem! or kindl 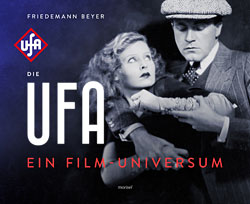 the 100th anniversary of Uƒa film studio by noted film historian Friedemann Beyer contains 15  posters from the Collection, all of which are reproduced in full–colour, as well as 4 B&W or colour images/photos. The Karl Ritter 2nd edition book by William Gillespie is listed in the book's Bibliography, as well.

We provided seven original Münchhausen  film posters from across 1943 Europe to The Potsdam Filmmuseum in Germany in 2017/18 as part of the celebration of the 100th anniversary of the founding of the famous Uƒa film studios at Babelsberg. The exhibition opened in December 2017 and ran for three months. The posters were subsequently shown in the exhibition when it was presented in August–October 2018 in Wiesbaden, at the Filmhaus of the F.W. Murnau Foundation.

Our Library received  from a Holocaust organisation in Rome their exhibition catalogue which reproduced some of our Collection's anti–Semitic poster images of German and Italian films, such as Harlan's Jud Süß and Waschnecks's Die Rothschilds in 2017, as well as the Mjölnir Sieg im Westen Gaufilmstelle poster, and the German poster for the Italian Fascist film on the 'Black shirts." The  192 page full–colour exhibition catalogue was published with the title LA RAZZA NEMICA – La propaganda antisemita nazista e fascista by Gangemi Editore International, Roma.

We were contacted in late 2017 by a Berlin DVD production company releasing DIFU dubbed German versions of Italian films from the 1938–1944 period, seeking film poster images etc from our expanded DIFU collection, which we happily provided.

Posters and promotional materials have been provided to International Historic Films in Chicago, for two new or forthcoming DVD releases of Karl Ritter's WWI epic Unternehmen Michael  as well as for the Hans Zöberlin Freikorps 'Munich Red Republic' film, Um das Menchenrecht.  Further upcoming IHF film titles in 2019/2020 have also been supported but cannot be disclosed at this time. See the last panel on the bottom of this page for updates on our DVD collaborations.

The Berlin Kinemathek / Berlin Film Museum on–line catalogue of pre–1945 film periodicals links our Index of DER DEUTSCHE FILM Zeitschrift found on this website, for the benefit of researchers.

Two academic researchers at universities in Belgium and Germany are working on an article on the Deutsche Filmakademie, Babelsberg, and we have supplied them with a 34 page scan of a rare publication in our Library which they could not find elsewhere, and did not know existed until we made contact, in July 2017.

Dr. Hans Traub (1901–1943) was the pioneering film researcher, scholar and archivist in the late Weimar and the Third Reich years when film was still a young 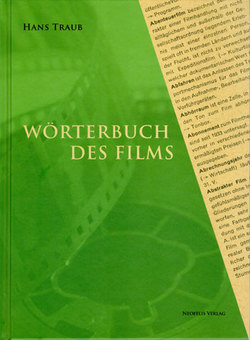 medium. He published a number of seminal works during this time -- including those found in our Library -- and his untimely death from blood poisoning in December 1943 meant a Dictionary of Film remained unfinished and unpublished. Interestingly, the Foreword for the book was written by none other than Prof. Karl Ritter. The manuscript, incomplete, was kept by his family and in 2007 found it's way into the collection of the Deutsche Kinemathek in Berlin. The manuscript has just been published as Wörterbuch des Films; by Hans Traub, Editors Rainer Rother und Rolf Aurich; Neofelis Verlag GmbH, Berlin 2017; 247 pages. The William Gillespie book on Karl Ritter is cited in the book, and Gillespie, who corresponded with Herr Aurich about Traub, is one of the individuals thanked by the Editors. As always, we were delighted to provide any information possible. 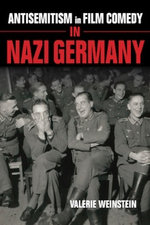 An April 2019 book  Antisemitism in Film Comedy in Nazi Germany  uses film stills and posters from our Collection. Published by Indiana University Press, the author is Prof. Valerie Weinstein.

POTSDAM FILMMUSEUM April 2019 – On loan from our Collection are 47 original German film posters, from Germany, Finland, Belgium, France and Sweden between the years of 1932 and 1954.

In the scholarly journal,  Seminar: A Journal of Germanic Studies 2019 Vol. 55, No. 2, an article  The Uniform in the Closet: Mädchen in Uniform in Nazi Germany by Valerie Weinstein, University of Cincinnati concluded with:

Many thanks to William Gillespie, The Gillespie Collection, Sydney, Australia, for sharing the Kamera and Kurbel cinema programs.....

At the Twenty-Seventh Biennial Conference of  IAFM&H (International Association for Media and History) titled  "Power and the Media"  which ran from 16-18 July 2019 at Northumbria University, Newcastle, in the U.K; Professors  Ciara Chambers  (University College, Cork) and Tobias Hochscherf (Kiel University of Applied Sciences) presented a paper  "Anti- British and anti-semitic propaganda: Third Reich Films and Ireland."  Our Collection provided images of the posters and some press-book material on the three films in question: Leinen aus Irland, Der Fuchs von Glenarvon, and Mein Leben für Irland. 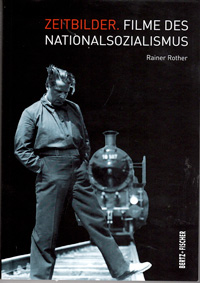 In the new August 2019 book by Dr. Rainer Rother, Zeitbilder. Filme des Nationalsozialismus, our book The Making of The Crew of the Dora, is cited in the Chapter on "Contemporary Films under wartime conditions, " which covers Karl Ritter's WWII military films such as Stukas and Besatzung Dora.

In January 2020, we received a request for a poster of the Emo film Wien 1910 to be published in the forthcoming book Art, Exhibition and Erasure in Nazi Vienna. (Bloomsbury Press.) 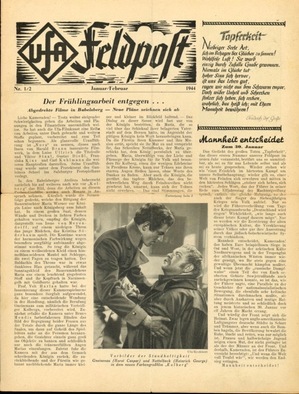 In April 2020 we scanned and sent to the Berlin Filmmuseum / Stiftung Deutsche Kinemathek's Head Schriftgut Librarian the complete year issues for 1943 and 1944 of the rare Ufa Feldpost monthly newsletter.  It was a publication for all Ufa staff and artists who were serving in the German armed forces, so that they would have news from the studio on forth–coming productions, and news of colleagues also serving on war fronts. We found that neither the Kinemathek's Library, nor that of the Bundesarchiv–Filmarchiv had 90% of these issues in their respective collections. The 1944 issues were particularly important insofar as they became the only Ufa publications after late 1943/early 1944 which provided news on their new productions. Their other publications had ceased due to wartime paper shortages.  Our book on Karl Ritter's  banned Besatzung Dora Luftwaffe film cites Feldpost news on the film months after all other Ufa publications had stopped reporting on it, for example. We are, as always, happy to see that items in the Collection are able to be shared and professionally exploited. The idea of hoarding rare film treasures in a basement or room somewhere and to keep them secret we feel is a selfish betrayal of the value of collecting and preserving such rarities.  We had provided the same Ufa Feldpost scans to the German Federal Archives' Filmarchiv at an earlier time.

In May 2020 we assisted a Ph.D student in Athens with images of our behind–the–scenes photographs and documentation of the Rene Deltgen WWII German miitary propaganda film Fronttheater.  The student has been delighted with the materials which we have made available, writing "The information you are giving me is very valuable to my thesis and I appreciate your trust to my intentions. " and: "The photos are remarkable. Your contribution will be of great help for my thesis." 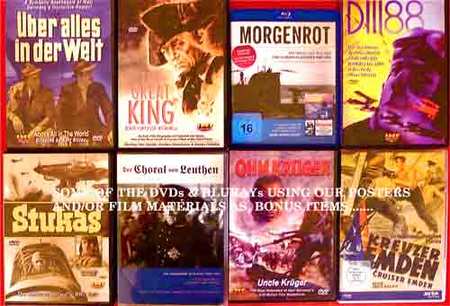