Our Poster of the Month

Each month we will display a film poster from our extensive Collection to highlight obscure films and their original posters not well–known today.

This month's poster is one from 1940, printed by the Gaufilmstelle film distribution organisation to bring motion pictures to the estimated 48,000 towns and villages with 23 million Germans who had no cinemas within reach. (as cited in Stahr, Gerhard; Volksgemeinschaft vor der Leinwand? ©2001.)

The famous Hans Bertram documentary film, Feuertaufe, brought the victorious Luftwaffe's campaign against Poland to the screen to all the major cinemas in the Reich.  We have both original German posters and the Italian poster, as well, in our Collection.

However, the Gauflmstelle poster presented below as our Poster of the Month, is absolutely unique. It may well be the only one extant. It is not referenced in any WWII or German documentary film work, nor reproduced in any known poster book. The title of the film on this poster  Our victorious Army in Poland – the powerful documentary of the present–day  is thought by experts to be an alternative early title to the film as it was rushed into screenings across the Gaufilmstelle network of mobile film projection trucks. The film premiered in April 1940 and this poster has a notice handwritten at the bottom indicating screenings on 3 May 1940, so millions of Germans who lived far away from major cities could see the film just a few weeks after it's premiere on 5 April 1940.

Apologies for the watermarks, but as this is the only known original poster to have survived WWII, we wish to protect our ownership of it for future publication. 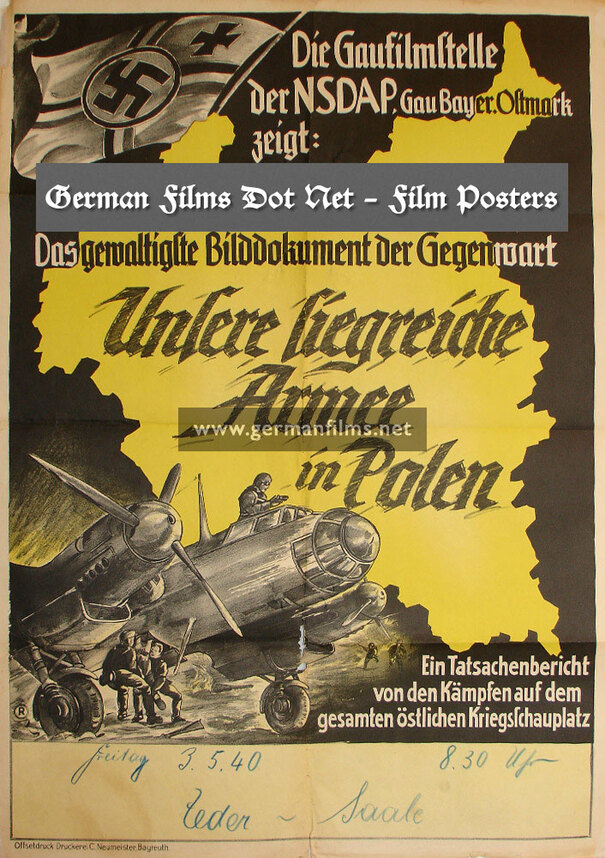