New acquisitions of importance shall be added to this page as the year unfolds......

We own both German posters for the Luftwaffe film Kampfgeschwader Lützow, as well as the poster from Fascist Italy and a small daybill–style poster from Sweden.  We have now purchased the A3 "Kleinplakat" German poster, as well. 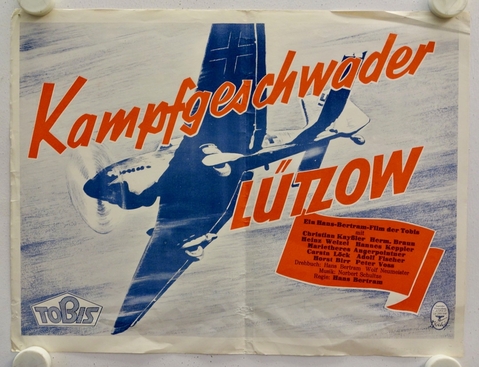 Our Deutsche Wochenschau poster and lobby card collection is very extensive, as can be found on this website. We have acquired a poster which we never knew anything about.  It is an A2-sized Gau Berlin poster advertising the 'newest film reports of the week' from the Front in 1940.  We have photographed it and added it to our Poster Gallery here.

We won at auction the 1938 film poster for 13 Mann und eine Kanone ("13 men and a cannon") directed by Johannes Meyer. We have received it safely and now added it to our Poster Gallery.

From a private collector in Europe the small 38 cm x 30 cm (ca. A3 vertical poster) Belgian poster for the Zarah Leander film Die große Liebe (1942). We show the poster below: 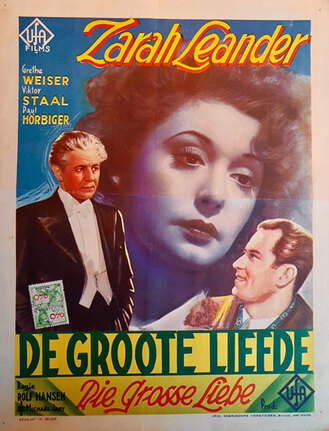 The Reich Propaganda Leadership  (RPL) Film Division of the NSDAP made a number of documentaries and short films meant for screening to Party members and selected other audiences. Simply text-only posters sufficed.  We have this month been offered privately and have purchased an extremely rare such poster, which is A3/ca. 12 x 17 inches large, for the anti–Semitic hate film called Juden ohne Maske, or Jews Unmasked. The film was released on 20 July 1938, with a running time of  37 minutes. 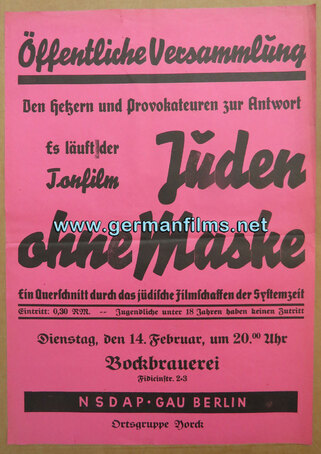 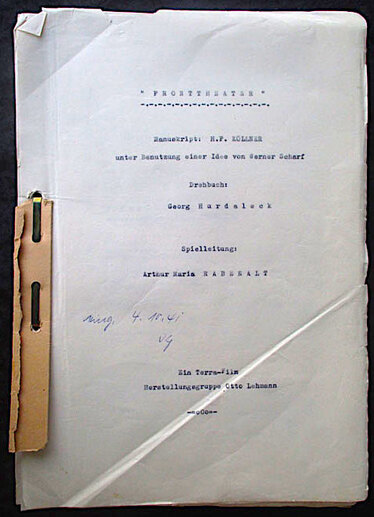 We have acquired the original film script for the film Wehrmacht propaganda feature film Fronttheater (1942) which came out of the estate of Rudolf Schündler, an actor who appeared in the film and who was also in charge of the management of the stage scenes shot in the amphitheatre in Athens which appeared in the film. The script's cover is missing, but all text pages are intact. The pages are the carbon paper copy made on the typewriter when the script was readied.

The Ufa film studio "Feuilletons" Hefte were inexpensive B&W offset printed booklets, often running 60 to 80 pages in length, one-sided, with background information, interviews, articles and dot matrix images of stills from the film, as well as pen and ink sketches of the artists used for reprinting in newspapers when a film was being promoted. The Feuilletions were not a substitute for the film's official press-book, which itself was usually 12 to 24 pages long, with colour cover and printed on better quality paper; nor a substitute for the "Werberatschlag" cinema owner's guide for marketing a film,. which was between 4 and 24 pages long, also with a colour cover and better quality paper, and which contained both dot matrix newspaper advertising templates to use as well as the announcement and reproduction of all the forthcoming large and small posters on a film. But the Feuilletons had far more extensive information on a film than either a press-book or a Werberatschlag. And, the information did not always overlap the material on those other booklets. They were an important adjunct to press-books and Werbertaschläge. We are delighted to announce that we have acquired the Feuilletons for both the Karl Ritter film, Verräter, which was ranked #1 at the box office across the German Reich in 1936/1937, and that of the classic Ucicky film Morgenrot. 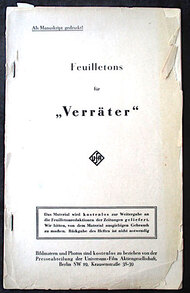 In over 25 years we have never found any original material on the film Hitlerjunge Quex when it was screened in Franco's Spain in and after 1939. Until last week. We won at auction a cinema handbill for the August 8, 1939 screening at a small cinema in a town in the Spanish region of Valencia.  The handbill reads:

The local Novelda Propaganda Headquarters  presents in a gala session at 10:30 at night, the film The Hitler Youth, EL FLECHA QUEX, a song to patriotic love. A film that vibrates the enthusiasm and selflessness of the little heroes who know how to sacrifice themselves for nobleness. 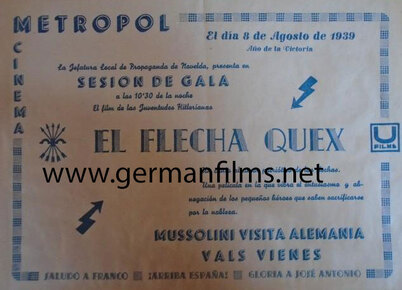 We have acquired an interesting film poster released by DIFU for Czech audiences, of a 1938 romantic comedy film from Mussolini Italy, now in our Poster Gallery here.  It is the only DIFU film poster in our Collection which does not have any German language text printed on it. It was obviously meant for Czech audiences in German occupied Böhmen & Mähren, as the film was released in Germany and a few other foreign countries in 1939, not in 1938 when it premiered in Italy.

This rare Uƒa Pressbook for the documentary film Sieg im Westen was won at auction in Germany. It is 32 pages and thankfully they are all intact. This is the first copy we have ever found, or even seen. Great to add to the Collection in its own right, but especially since we have two original posters for the film in our Poster Collection, and many lobby cards as well. 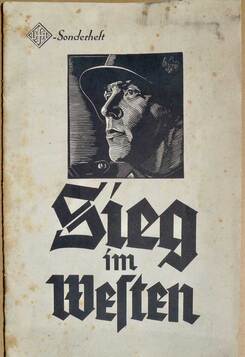 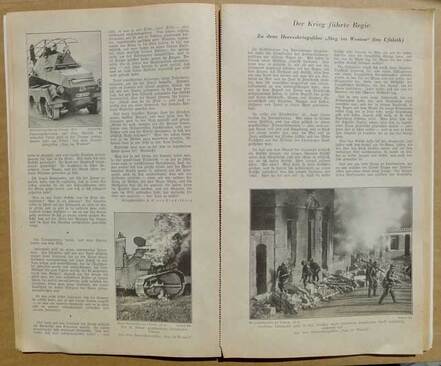 In Barcelona, we sourced this 1938 Spanish language brochure on Leni Riefenstahl‘s Olympia film. which is 12 pages long.  A nice addition to our extensive collection of original posters, lobby cards, and film studio promotional material and ephemera on the famous film. 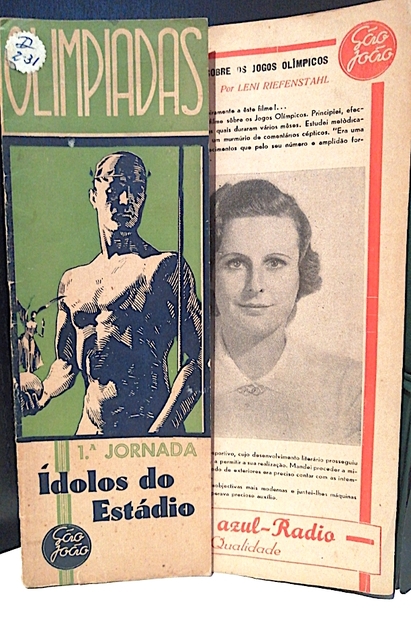 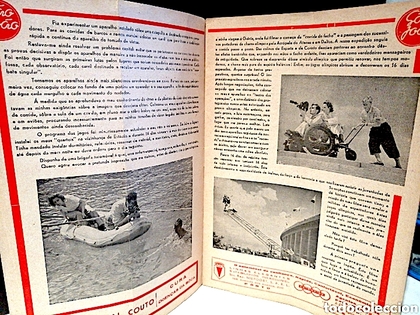 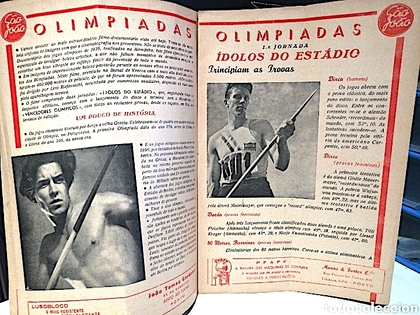 An Austrian collector contacted us through this website and we have just purchased two excellent but somewhat worn A0-sized propaganda film posters which have arrived. Larger images can be seen in our Poster Gallery. The Mein Leben für Irland poster is the second one we have of this film. The first graphic design is also in the Poster Gallery. 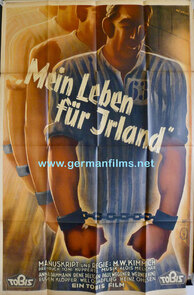 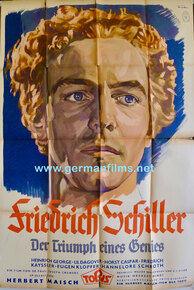 In the Poster Gallery we show 3 different graphic designed posters for the Italian 1942 war film Giarabub from our Collection. We also have 8 original Fotobusta cardboard A3 sized posters for the film. A review from Nazi Germany's major film newspaper is found here.  We also own original Italian and German lobby cards from the film.

After a decade of searching, we have finally found the rare press-book for the film. It is 16 pages long, sized 24 cm x 37 cm (ca. 9 x 12 inches). We show the cover and an inside spread from the press-book here: 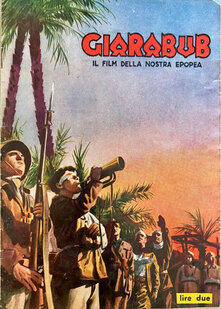 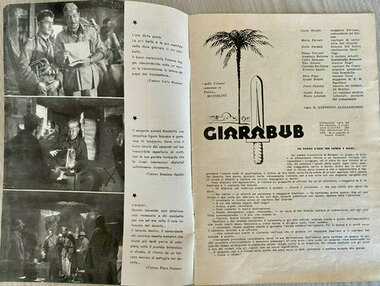 We are delighted to acquire the press-book for this film to complement our many posters. 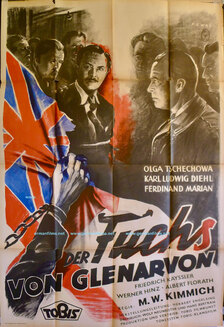 We have just acquired the second version of the German poster for the Max Kimmich anti-British, pro–Irish independence propaganda flm, Der Fuchs von Glenarvon from an Austrian collector. It has now arrived and been photographed added to our Poster Gallery.

From Vienna yet another excellent feature film poster -- this one designed by famed graphic artist Theo Matejko, who also did one of our "Emden" film posters found in the Poster Gallery.  This image provided by the seller. The poster has now been  properly photographed and added to our Poster Gallery. 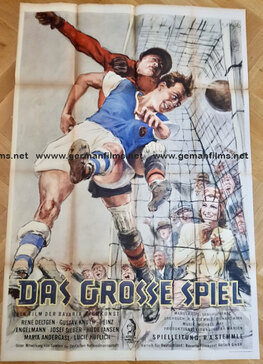 We have won at auction on-line from Germany an extremely rare photograph made into a postcard by a photo atelier in Berlin–Schöneberg in 1933 or 1934. The back of the photograph states "Echte Photographie" which designates that it is an original print made from a negative. The photo is of Jürgen Ohlsen, who starred in the film Hitlerjunge Quex in 1933.  Ohlsen was born and lived with his family in Berlin-Schöneberg. Undoubtedly the photo atlelier was located not far from his family home.

An expert on the HJ who is a major collector of HJ photos and ephemera here in Australia has provided us with this analysis:

The shoulder boards that Jürgen wears in the movie are the early pre– 1933 version. The edging of the boards are black and white, the Oberbann colours for Berlin. The single pip in the centre designates he holds the rank of Kamaradschaftsführer.
In the personal photo (below) he is not wearing boards, the Führerschnur (rank cord) is attached to the shoulder button (not uncommon). He also wears the second type HJ Badge and early DJ Badge. The photo is almost certainly taken 1933/34, probably 1934. It is difficult to make out the colour of the Führerschnur so difficult to state his rank at the time. 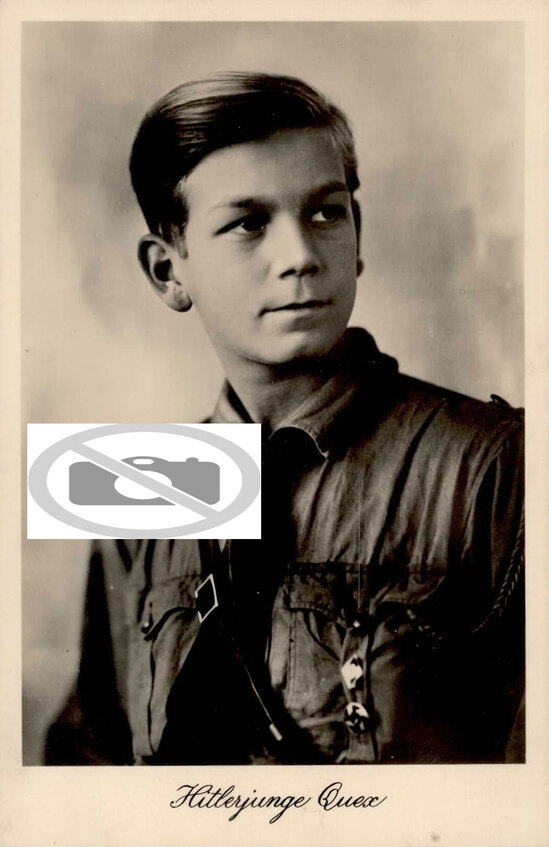 This indicates that Jürgen Ohlsen is wearing his own real HJ uniform in the photograph above. We surmise that he asked that the wording "Hitlerjunge Quex" be added to the front of the card as he was proud of his title name role in the new film. This card is completely different than any of the  Quex film's promotional cards published by the famous Ross Verlag ("Roßkarte") we have in our Collection or which can be found for the hundreds of German film stars of the era.  The Roßkarte used a different paper stock and a completely different type font, and had "Ross Verlag" and the name of the film studio ("Ufa," "Tobis," "Terra,"  "Bavaria," etc.) printed on the two bottom opposite  front corners. And as the HJ expert we consulted states above, the uniform worn  by Jürgen Ohlsen/"Heini" in the film was a pre-1933 earlier style of HJ uniform that was historically correct for the 1932 era that was depicted in the movie.

We are currently revising and updating the  "Jürgen Ohlsen" web page we previously had on this main Home page menu and will be restoring the latest version by the end of this year.