–– "one of the strangest pictures made during the Third Reich"  ? 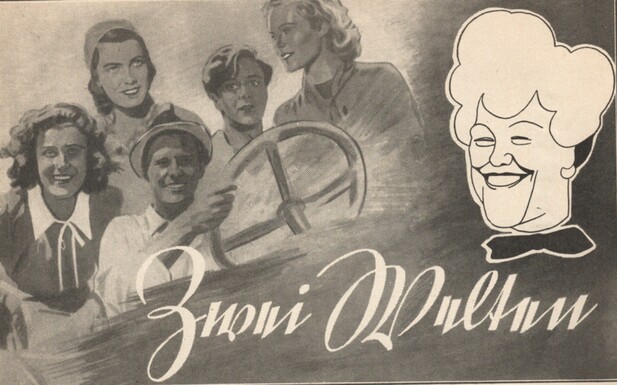 Gustaf Gründgens, the famous and gifted stage and film actor, who became well–known worldwide after his role in the early sound Fritz Lang film M,  acted in and also directed dozens of plays in the Weimar and Third Reich years,  appeared in motion pistures, and enjoyed a post–WWII  touring career. His role as Faust both on stage and on film was particularly celebrated.

He was Director of only one film, Zwei Welten / Two Worlds, for which he discovered and cast four unknown young actors and actresses from theatre in their screen debuts; and pitted them against well-established middle-aged film stars playing the stuffy and old–fashioned Bremer-Bratt aunt and uncle of one of the boys. 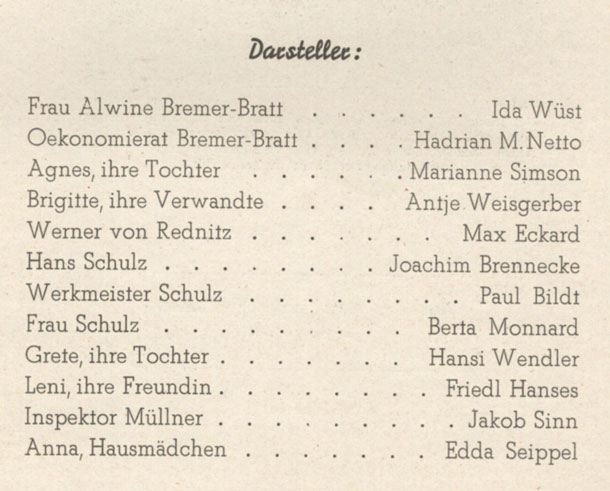 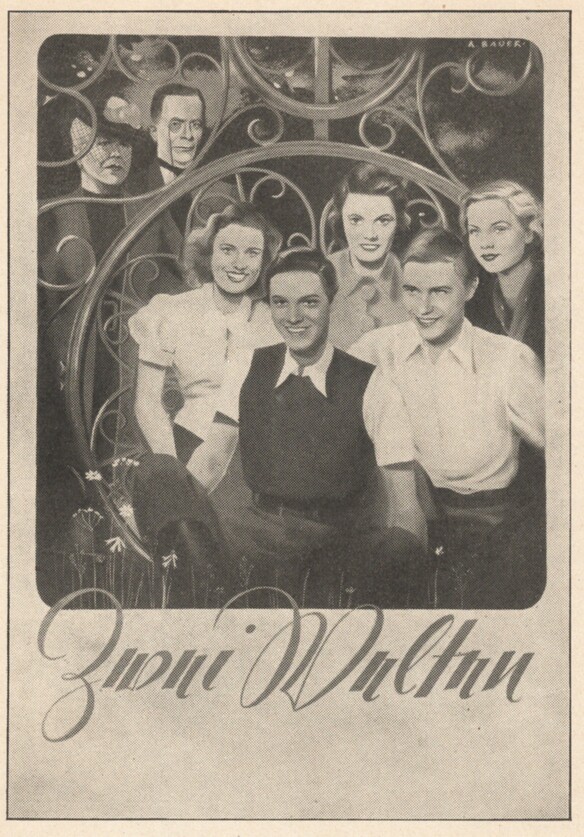 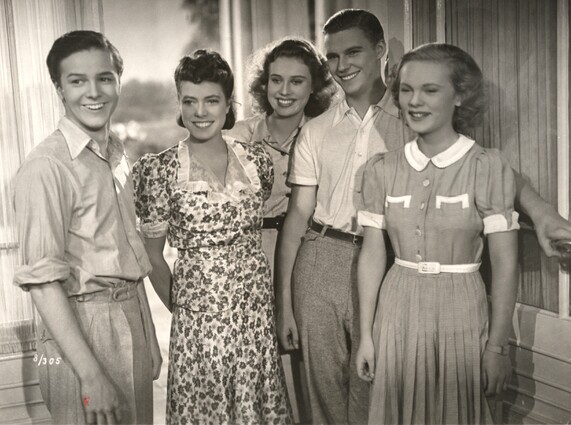 The film script was written by Felix Lützkendorf, who had authored many films, including a number of propaganda films as Karl Ritter’s co–author (for example: Kadetten, Stukas,  Über alles in der Welt, Besatzung Dora, Legion Condor).  Lützkendorf was a National Socialist, a True Believer, and held the rank of Unteroffizier in the SS.

Herbert Holba, in his 1978 monograph on Gründgens, states that

“ Karl Ritter, for example, would have derived a specific Nazi propaganda film from this [script.]. For Gründgens, who only wanted to follow Lützkendorf's instructions to a limited extent, it served as a sublimation of his homoerotic inclinations. “

Below: Gründgens on the set of Zwei Welten. 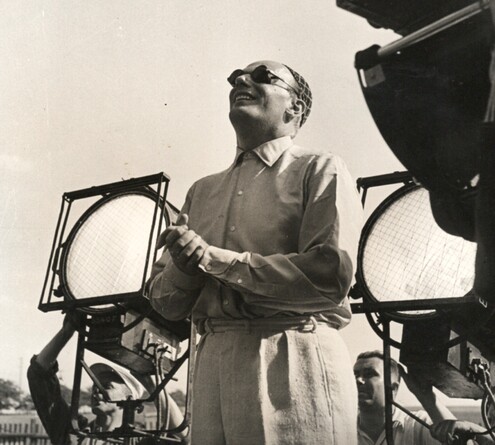 
“ Two boys, a worker boy from Berlin and a young baron, report for the harvest service. They are assigned to a manor belonging to relatives of the baron who, however, do not know him personally. In order to play a prank on his family, he takes on the role of the worker boy - who is decried as an oaf - and lets his friend act as a "nobleman". The opportunity for numerous mix-ups and errors is given and is subsequently also widely exploited. The female flora present, pretty girls with restrained charm, gradually participate in the humorous game and helps the boys to win over old–fashioned ways of thinking."

"Although the original intention of playing the old with the new was retained, the way in which Gründgens worked it out on film turned into a bizarre paraphrase about the interchangeability of terms, actions and roles. The tense relationship with the aunt, who tried to tyrannise the male world, offers enough material to get the boys into situations in which they have to successfully defend themselves against attacks by the principle female.  They defend their alliance of men with relish and demonstrate several times that they can do without the female gender. They even bring the timid uncle, who has to suffer under the knuckle of his ruler, to the point that he reconsiders his masculine strength and, together with the boy, brings the primordial woman to reason. “ 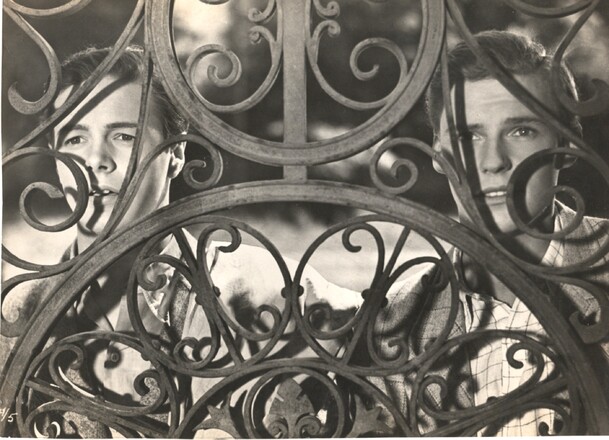 Holba addresses the ways in which Gründgens fashioned his film away from being a true propaganda piece or a Hitler Youth film:

“ The Nazi rituals, which were quickly dropped, the banding about of ideological phrases, which are immediately replaced by hearty jokes, as well as the ironic treatment of typical Belief-and-Beauty (“Glaube-und-Schönheit”) symbols, defuse the ideological tendency and make it untrustworthy.

Overlaying HJ phraseologies and BDM indulgence with an aesthetic cat-and-mouse game between two youngsters who move like narcissi in love with themselves is almost self-evident. “

A film review of Zwei Welten some months after the premiere reflected:

"The two boys, Max Eckard and Joachim Brennecke, develop a freshness in the process and an acting daredevil of conditional superiority compared to the somewhat slightly biased performances of the young actresses. " (Film Illustrierte magazine, September 1940).

In the Catalogue of Forbidden German Feature and Short Film Productions, dating from 1951, and published in conjunction the Imperial War Museum, a short synopsis of the film  states:

Post–war film historians have been far less kind, to say the least. Frenchmen Courtade and Caders  in their 1972  Histoire du Cinema nazi simply said about Gründgens film, that it  “added nothing to his glory”.

Film historian David Hull in his 1969 work  Film in the Third Reich,  wrote: 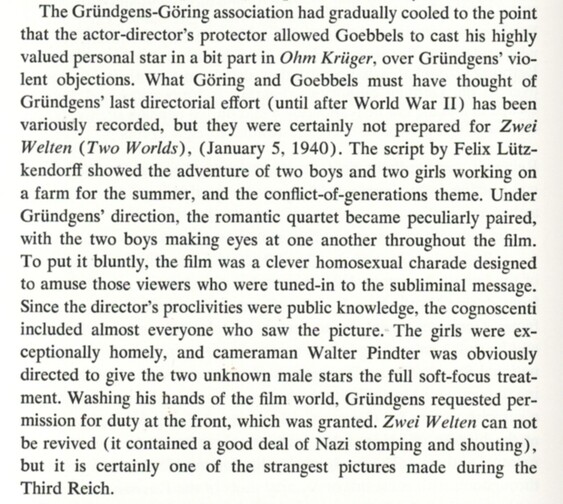 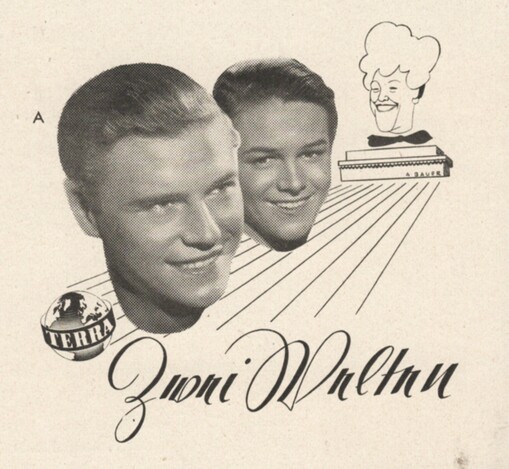 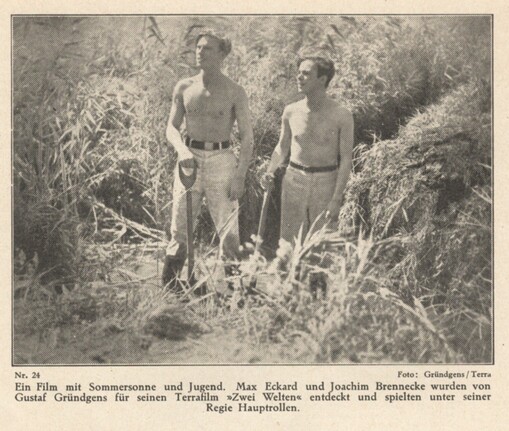 Below: the two "homely" girls, according to David Hull..... 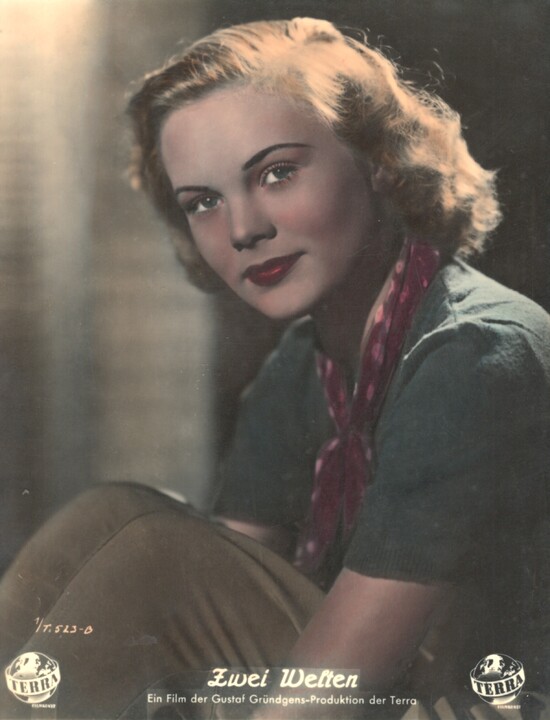 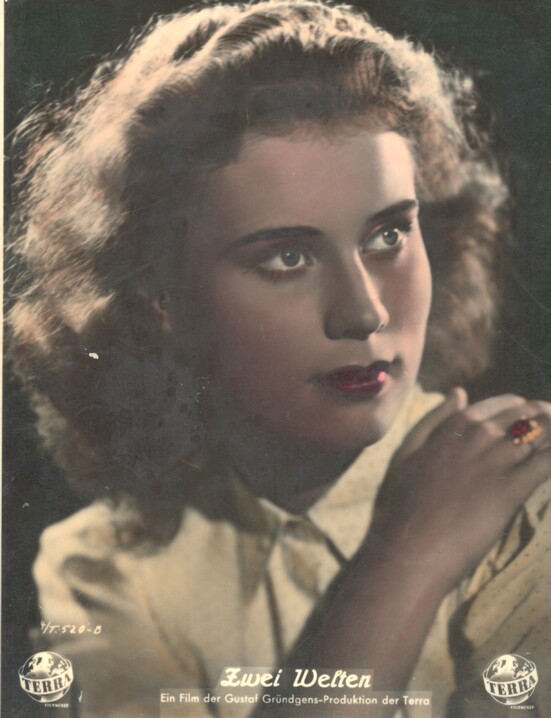 A scene back in Berlin at the fairground...... 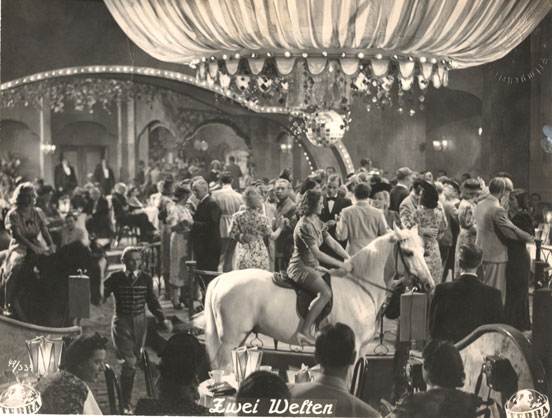 Hull makes it sound as if Gründgens fled into military service as soon as Zwei Welten was over. Hull’s paragraph is misleading insofar as Gründgens being forced to play the role of British Foreign Minister Joseph Chamberlain in Ohm Krüger took place many months after Zwei Welten premiered. (It must be said that for this role Gründgens earned an astronomical RM80,000 for six days of film-shooting). Furthermore, Gründgens made another film after Ohm Krüger, that of Friedemann Bach, in which he played the title role. (Premiere 25 June 1941). It is also a fact that he did not go into military service for another two years,  in the Summer of 1943; well after Goebbel’s Total War speech of 18 February that year.

Zwei Welten was never re–released after WWII but in November 1981 it was dropped from the Vorbehaltsliste by the FSK German film ratings board with the proviso that cuts of Nazi symbols, dialogue, etc. be made. No commercial release has eventuated. The film has no Nazi symbols, as none of the boys and girls are shown in  HJ/BDM uniform even en route on the train from Berlin to the rural area where they are to help bring in the harvest. There are no swastika flags or signage shown at any time. There are a few “Heil Hitlers!” in the spoken dialogue but that is about it. The comment in the Catalogue of Forbidden German Feature and Short Film Productions  that the film is “uncuttable”  due to Hitler greetings and objectionable remarks, seems harsh;  other than for the occasional “Heil Hitlers!”

Our Collection has for this film:

The Cinema Owners’ Promotion Guide (Werberatschlag)
The Terra Filmkunst press-book
The invitation to the film’s premiere at the Capitol Theatre in Berlin, dated 5 January 1940
Seventeen lobby cards
Two colour film sheet lobby cards for foyer light-box display
We do not own an original poster for the film.