Our acquisition of an original film script for the film Jud Süss  – which was the personal copy of the actor Werner Krauss –  has prompted us to add this new page to our film website.

Actor Werner Krauss, famous for his silent film roles, such as the title role 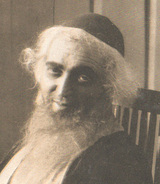 in The Cabinet of Dr. Caligari  (1919) and many other films and hundreds of theatre stage performances, played no less than six Jewish character roles in the 1940 anti–semitic film directed by Veit Harlan. Krauss had played Jewish characters dating back to 1922, when he was Nathan the Wise in the Noa film Nathan der Weise. A photograph of him as Nathan  from that fim's press-book is shown here.

Film historians have retold the way in which Krauss was contracted to appear in this notorious film less than a year after the commencement of WWII. The quotes and details below are taken from some of the 1949 original newspaper clippings in our Collection on the trial of Veit Harlan at which Krauss, amongst other actors, appeared and testified.

In the 2014 documentary Forbidden Films (Verbotene Filme) on NS films produced by Dr. Felix Moeller, young generation Jews who watched Jud Süß at a private showing in Israel stated that it would not make anyone anti-Semitic because the characterization of Jews by non–Jewish actors was laughable. But Hollywood has a long tradition of having non–Jews appear as main Jewish characters.* One can think of very pretty Millie Perkins as the lead actress in George Steven’s 1959 film on Anne Frank – a major transformation from the awkward and very plain–looking teenager. Or Maureen Stapleton as a stunning–looking Emma Goldman in Reds (1981) – Goldman being positively ugly, overweight and unattractive, to be kind. Or Barbara Sukowa as Rosa Luxembourg (1986), and later as Hannah Arendt (2012) – both women in real life ones who would be unrecognizable from these screen images. And in male roles, Ryan Reynolds portraying the Jewish lawyer Ronald Schoenberg in Woman in Gold (2016) – a complete ‘Aryanisation’ to say the least.  Finally, how about blonde -haired and blue-eyed Jeffrey Hunter playing the role of Jesus himself in King of Kings? Talk about Aryan wish fulfillment! As Jewish actors were forbidden to appear in German films (the Polish Jewish actor who played rags trader Solomonsohn in Ucicky’s Heimkehr being a distinct exception), German and Austrians such as Werner Krauss, Siegfried Breuer, Ferdinand Marian, Fritz Imhoff, Inge van der Straaten, and Herbert Hübner, and others stepped into such roles and convinced German audiences of the day.

After the war, Krauss was charged with offences of being a Nazi, even though he was never a NSDAP member. He was acquitted twice by German de–nazification reviews, but under pressure from the Allies, which then constructed a new panel made up of resistance members, German Communist Party members, Socialists and exiles, he was deemed a "Fellow Traveler" and had a work ban imposed for 2 years as well as a RM5,000 fine. A fine of that size was equal to two year's wages of an average worker at the time. 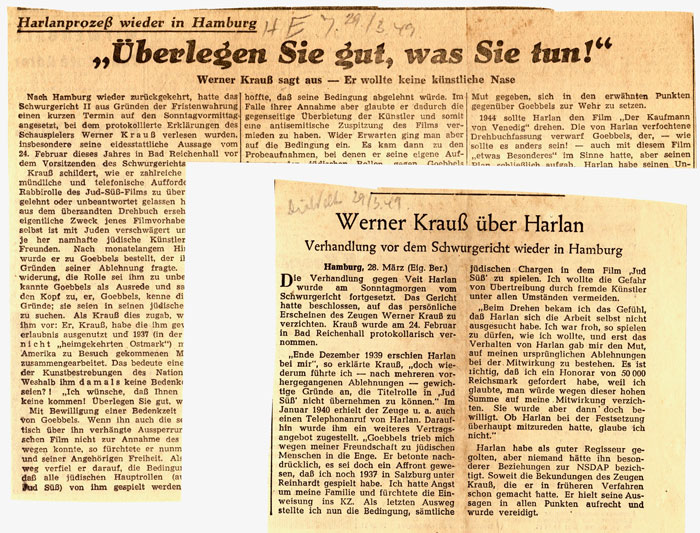 In evidence given at the 1949 Hamburg trial of Director Veit Harlan for "crimes against humanity" for producing the film, Krauss testified: 'At the end of December 1939 Harlan appeared before me and I argued, for important reasons,  as per many previous attempts in the past, to refuse the title role in the film "Jud Süß."  '

In January 1940 he received a phone call from Harlan, during which another  contracted role was put to him. Terra Filmkunst, the studio responsible for producing the film, requested that he consider the role of Chief Rabbi Löw. He politely declined, as he was not keen to appear in the film. A second letter shortly thereafter arrived indicating that at the request of Reichsminister Joseph Goebbels he was directed to take on the role of Rabbi Löw. A meeting with Dr. Goebbels followed, in which the Minister reiterated all the ways in which Krauss over time had disappointed and betrayed the regime and National Socialism -- working with Jews and Socialists in the Weimar era, having two siblings married to Jews, having a daughter married to a Jew....working with exiled Max Reinhardt at the pre–Anschluss Salzburg Festival in 1937 -- but Krauss still resisted, and asked for time to think about it.  As he left the meeting, Goebbels warned him, "Think carefully about what you do!"

Having spoken privately to both Harlan and the actor Ferdinand Marian, who himself was arm–twisted -- threatened –- if he did not take on the title role in the film, Krauss knew that he was now in a tight spot. He devised a way in which he hoped to convince Goebbels to move on and find another actor. He told Harlan to relay to Dr. Goebbels that he could not accept the role, as it was only  after all a secondary role, and as he felt he could only do so if he was offered all the secondary Jewish character roles, and also a (very considerable) fee of RM50,000. (Harlan's memoirs state that Krauss said "I'll either play the Jewish race or nothing at all.") Goebbels had made it clear over the years that he despised show–off actors who played double roles in film, and found them unacceptable. To Krauss' shock, as well as Harlan's, Goebbels replied that he thought, yes, it was an interesting proposition, and yes, to go ahead with casting him.   The rest was history, as they say.

"When you were with Goebbels, you felt like a child walking through a dark forest as it crackles along the path."  –– Werner Krauss, 5 März 1949, Hamburger Abendblatt.

"The time of Hitler demanded political consciousness. It was different to play an evil Shylock under the direction of [Max] Reinhardt in 1921, than to work under the Nazis in the film JUD

SÜß. Werner Krauß, who was never a hypocrite, and who was not at all pleased with the sympathy of Hitler, should have realized that this film was not made for the sake of the film, but to create material against the Jews, so that his roles would be misunderstood politically. But here he failed. It was precisely such a brilliant talent that found its limits here." --Herbert Ihering (1888-1977) in Werner Krauß, ein Schauspieler und das Neunzehnnte Jahrhundert,   Verlag Nowerk 8, 1997.

From a contemporary review of his Shylock:

"With a crash and a weird train of shadows, something revoltingly alien and startlingly repulsive crawled across the stage…. The pale pink face, surrounded by bright red hair and beard, with its unsteady, cunning little eyes;the greasy caftan with the yellow prayer shawl slung round; the splay-footed, shuffling walk; the foot stamping with rage; the claw-like gestures with the hands; the voice, now bawling, now muttering—all add up to a pathological image of the East European Jewish type, expressing all its inner and outer uncleanliness, emphasizing danger through humor."

From  December  14, 2007 to  August  3, 2008 the Stuttgart "House of History Baden-Württenberg Museum"  presented an extraordinary exhibition called "Jud Süss – A propaganda film in the NS State."  The Museum had curated the largest number of original materials on the Veit Harlan film ever assembled. It was a smash success, attracting large attendances, and a superb 150 page exhibition catalogue was published.It was reported that other film museums in Germany and some foreign countries enquired if the exhibition could be loaned to them, but as so many historic items were on loan from a large number of German and foreign sources, including many private collections, this was impossible.

The cover of the catalogue is shown here: 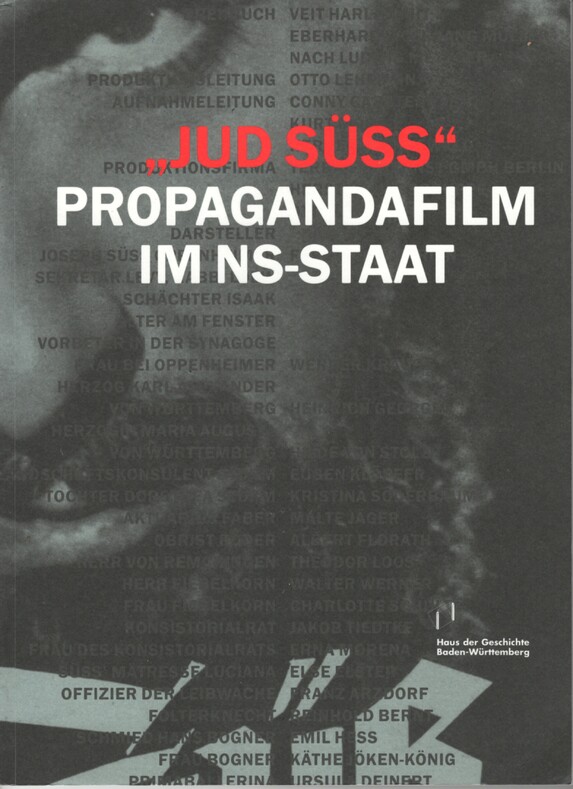 We loaned two original film posters from Belgium and Italy to the exhibition, as well as the original  21-page Harlan "Testament 1945" treatise written and signed by him in May 1945.

As the true history of Jud Süß Oppenheimer in the employ of the Duke of Baden-Württenberg, and the trial of 'Jud Süß',  took place in Stuttgart, the exhibition had the original 1737 court proceeding documents from the archives on display, along with dozens of other outstanding historic items. One of which was the film script of the film owned by actor Werner Krauss. The catalogue page illustrating this incredible piece of  film history is shown below: 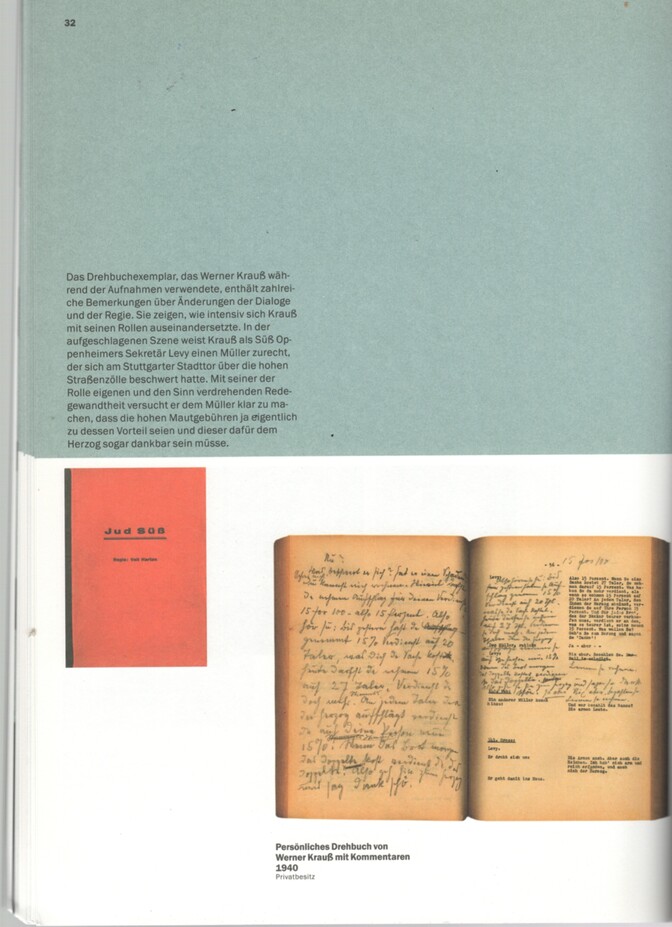 William Gillespie was able to attend the exhibition in Summer 2008. The film script, shown under glass, seemed to be an unobtainable film treasure. But nine years later, it came up for auction and we were the lucky winners.  The script is annotated by Krauss on the reverse side of the scattered script pages, inserting new additional dialogue missing from this early version of the printed film script....dialogue which is found in the final film version as spoken by Süß Oppenheimer's enforcer, Levy. This is an amazing piece of German film history, and a true "there is only one-in-the-world" object. The script is now in our Collection.

The page below states that the the film script is the Property of Terra Filmkunst and the contents are treated as confidential, that the contents are forbidden to be reproduced,  and that at the end of the film–shoot the script must be handed over to Terra Filmkunst. Oversight of copies of film scripts in the Third Reich was carefully recorded, so to have any scripts today, never mind one in private hands from such a notorious film, is extremely rare. 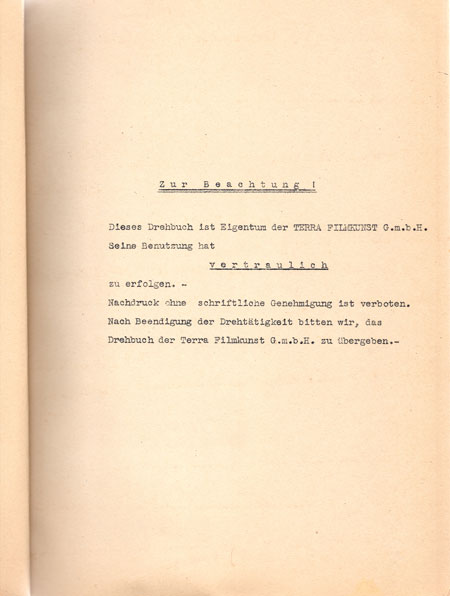 From our film ephemera collection; the "Kamera" cinema at Under den Linden 51, Berlin, listing the screening of the film in June, 1941: 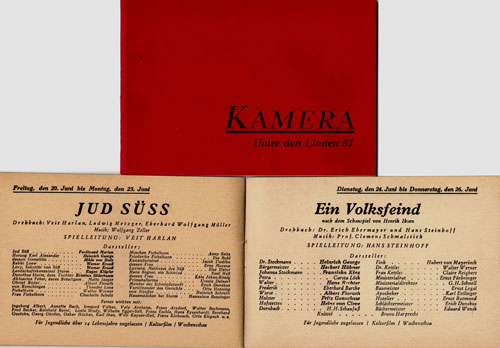 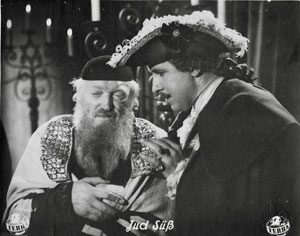 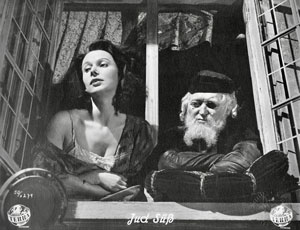 As a Jewish grandfather with his daughter at the window overlooking the Judengasse in the Stuttgart ghetto. A particularly reviled scene post–1945,  as it suggests a sexual encounter between family members when the grandfather commands " Get dressed, Rebekah." 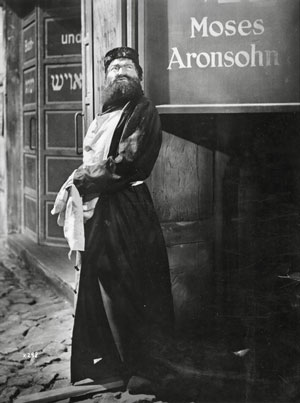 As the Jewish kosher butcher in the ghetto, with his bloody apron. Many audience members would have been horrified to be reminded of kosher slaughter methods, which were banned by the Third Reich. 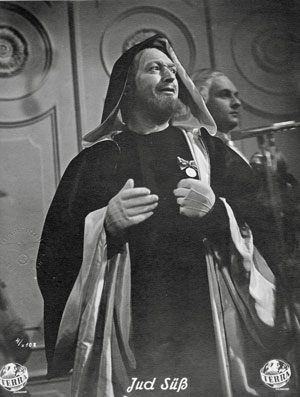 As State Secretary Levy, the right–hand man of Süss, and his enforcer within the Duchy of Württemberg.

In addition to the four roles above, Krauss also played the lesser non–speaking roles of a member of the congregation at prayer in the synagogue scene, and that of an old woman who appears on the ground floor of the Süß residence.  These roles are confirmed by comments by Krauss quoted in the post–war biography by Wolfgang Goetz, as well as by film historian Susan Tegel in her book on the film. 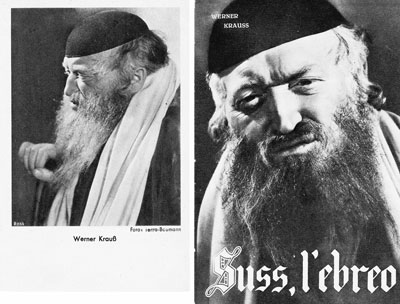 Left: The very rare "Programm von Heute" Rabbi Löw postcard for the film; and the Italian film postcard for Werner Krauss when the film was released in Fascist Italy to great acclaim. Both cards from our Collection.

Our Collection has no fewer than eight 1940/41 original posters  and one Italian Fotobusta of the film which are to be found in our Poster Gallery. The index page showing all eight of the original posters and the one Fotobusta can be found via this link.

* Jewish comedian Sarah Silverman in an October 2021 article in NEWSWEEK  complained about this tradition:  " There’s this long tradition of non-Jews playing Jews, and not just playing people who happen to be Jewish but people whose Jewishness is their whole being,” Silverman said; adding, “One could argue, for instance, that a Gentile [a non-Jew] playing Joan Rivers correctly would be doing what is actually called ‘Jewface.'” She continued, “It’s defined as when a non-Jew portrays a Jew with the Jewishness front and center, often with makeup or changing of features, big fake nose, all the New York-y or Yiddish-y inflection."