Karl Ritter, His Life and 'Zeitfilms' under National Socialism 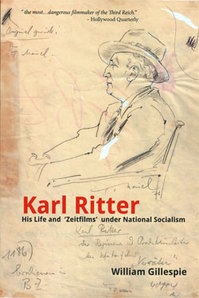 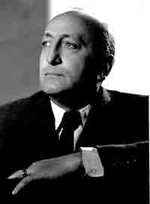 German filmmaker Karl Ritter scripted, assisted, directed, produced or planned over 120 silent and sound motion pictures in his career, but he is dismissed today as an unrepentant National Socialist whose main infamy are his propaganda feature films championing war, heroic sacrifice, and the anti-Communist fight on behalf of Greater Germany.

Between 1936 and 1942, Ritter's propaganda films were amongst the highest-grossing Ufa film studio productions in those years:

The Gillespie Collection has acquired over decades a large amount of original source material on Karl Ritter and his films for Uƒa through to 1944. These include original posters (see below), press books, cinema owners' guides to his films, Uƒa publicity materials, contemporary Geman film magazines, film newspapers with articles on Ritter and/or his films; hundreds of original production stills (lobby cards and press photos) of his films. We have one of Karl Ritter's own albums with his many collected newspaper and magazine clippings for his 1937 film Capriccio; and three extremely rare original Uƒa film scripts for his propaganda films  Pour le Mérite,  for Über alles in der Welt, and for the abandoned film Legion Condor.  In 2011 and again in 2014 we gained exclusive access in Argentina to Prof. Ritter's unpublished, private diaries courtesy of his grandson. These diaries stimulated the research and publishing of the three books under our German Films Dot Net brand; Karl Ritter: His Life and 'Zeitfilms' under National Socialism (2nd edition, 2014) and The Making of  The Crew of the Dora (2016, and Legion Condor – Karl Ritter's lost 1939 feature film (2019,) -- All three books are in print and available from International Historic Films, Chicago; and also on this website through our Poster Shop. 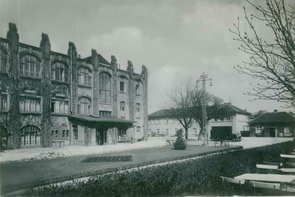 At RIGHT, the building on the famous Ufa film studio grounds, Ufa–Babelsberg, where Karl Ritter and five other Production Leaders had their offices. The Herstellungsgruppe Bldg.

BELOW, the building today, which is now 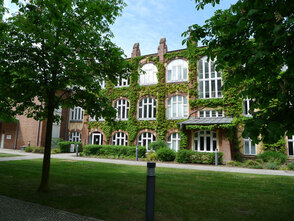 Our main  KARL RITTER research documentation, translations and original source material, such as Karl Ritter film scripts and copies of his private diary pages, on our Collection shelving. Limited space prevents us from showing all such Karl Ritter material -- much more are hidden behind these files. 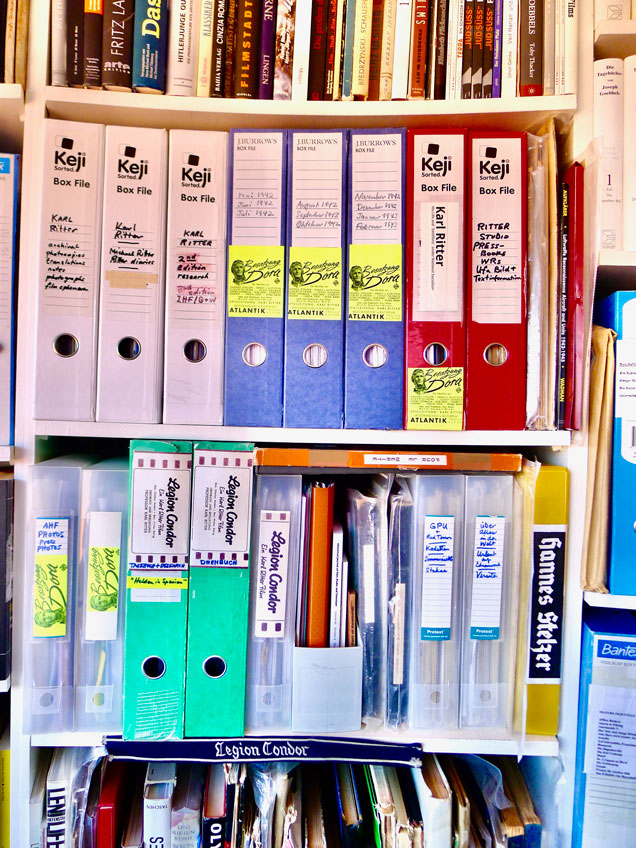 Our three original Uƒa film scripts for propaganda films produced and directed by Karl Ritter. Original film scripts were the property of the film studio, their circulation was restricted and had to be returned to the studio once filming was over.  Thus originals in private hands are scarce. Our Legion Condor script, of course, being unique in the world.

The German Film Collection has a number of very rare posters  for many of his most controversial films. These include the original German Ufa posters for Stukas (1941), Kadetten (1939/41), and GPU (1942), as well as the Italian poster for Pour le Mérite (1938), the Swedish posters for Stukas (1941), for Verräter (1936), Patrioten (1937, we have  two different graphics)  and both the German poster as well as the Sudetenland poster for Urlaub auf Ehrenwort (1937), the Italian poster for GPU, the Norwegian poster for Patrioten (1937) and the Kadetten poster for Flanders. The Collection also has the very large pre-Anschluss Austrian “Litfass” poster for Verräter. The Collection also has the Belgian (Flemish language) poster for the 1936 comedy Weiberregiment, which marked Ritter's first Ufa production as a Director, and also the Belgian A2 sized original poster for his Lillian Harvey comedy of 1937, Capriccio. In 2017 we acquired both the Böhmen & Mähren Protectorate Daybill–style poster of his famous Stukas, as well as the rare Bulgarian A1 sized poster for his Verräter. This poster is an exact original copy of the German original contemporary Uƒa poster designed by famed graphic artist Peter Pewas; except of course for the Cyrillic lettering of the film credits and title.

We also have two very rare silent film posters designed by Karl Ritter in 1927 when he was a graphic artist working for Emelka Film and Südfilm AG, both in Munich. They are for the films Heidelberg, ich kann dich nie vergessen und the Hans Steinhoff film, Schwiegersöhne, starring the 'Laurel and Hardy of Europe,' Pat und Patachon. 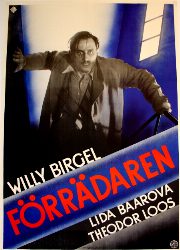 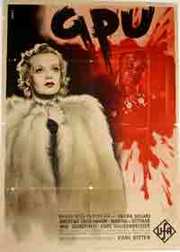 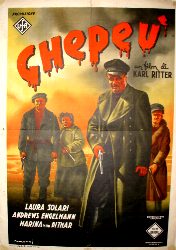 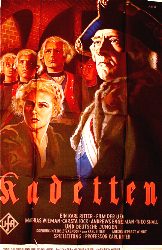 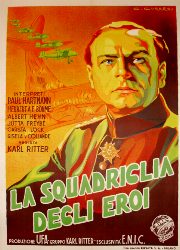 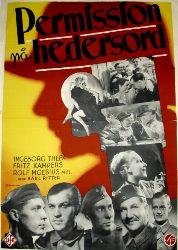 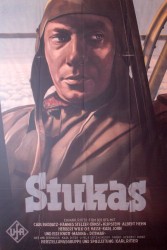 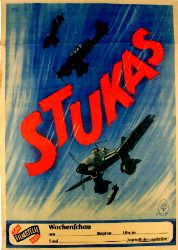 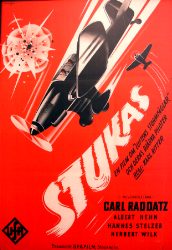 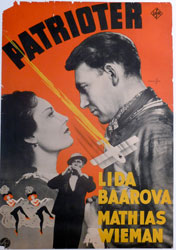 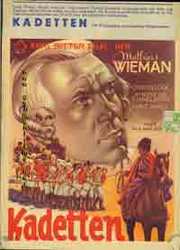 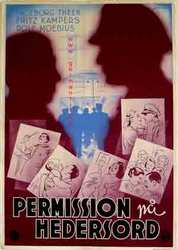 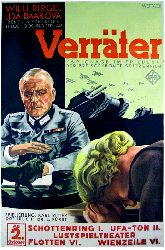 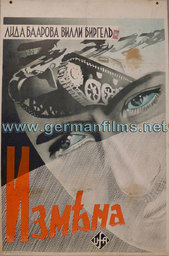 Amongst the film materials collected are some 485 original Ufa film stills for the feature films above, as well as photos from Ritter’s family album of his own WWI military service as a pilot, his personal publicity/clippings album for his comedy Capriccio (1938) , Ufa studio promotional materials ("Werberatschläge" and pressbooks) for many of his films, as well promotional materials  for GPU  from Italy. In June 2015 fourteen extremely rare USA lobby cards for the Cold War release of the film, entitled THE RED TERROR, were acquired by auction in America. The hypocracy of branding Ritter a Nazi propagandist and imprisoning him in 1945 and then using one of his most infamous anti-communist films in America and England was breath-taking. 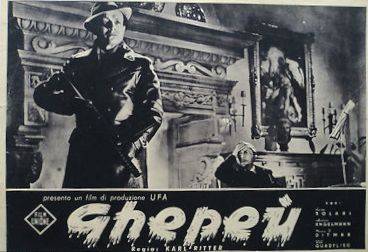 The original Ufa studio film script for Über alles in der Welt (1941) is also in the Collection. Film scripts are especially rare outside of German film archives as they remained the property of the film studio and had to be returned at the end of the film's production.  In December 2013 the original Ufa film script for Pour le Mérite was purchased and included with the script was the original film–shoot production schedule chart and a sketch of the prison set indicating the camera work necessary to follow the escaping prisoners. The script book and production chart  are shown further down this web page. In August 2018 we discovered the long–lost Ufa film script for Ritter's intended feature film Legion Condor in a Berlin used bookstore. The film was meant to be the direct sequel to his 1938 smash it, Pour le Mėrite. The full story and the entire film script, translated into English, is exclusively available in our latest book.

In May, 1938 the popular German  magazine Filmwelt ran a three–part biographical sketch on Karl Ritter. (The newsstand kiosk poster advertising the first issue of the three magazines with the Ritter biography can be found in the poster gallery here.)  Posters, sketches and Ex Libris plates drawn by Ritter prior to his work at Ufa film studios were illustrated in the article. One pencil sketch from 1921 of a weary Parsival (Parsifal)  returning from his Grail quest on his horse,  entitled 'Heimweh' (Homesick) was shown. The Collection has acquired an original copy of this sketch signed by Ritter. The page from the magazine showing the Heimweh sketch and other illustrations drawn by Karl Ritter is shown here, along with the 'Heimweh' sketch now found in the Collection: 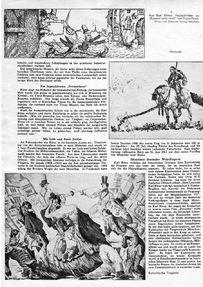 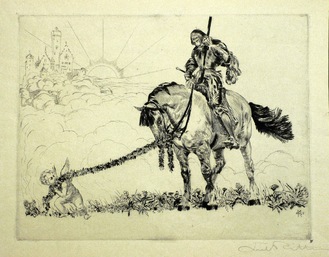 The Gillespie Collection also has a very rare, limited edition, small 800 silver cup made to commemorate the completion of Ritter’s Pour le Mérite in 1938, and given to members of the cast. The cup has a reproduction of the military medal “Pour le Mérite” mounted on the cup, and on the reverse, the engraved words “ UFA – FILM 1938 “ . The cup came in a presentation box, which is also in the Collection.

Ritter’s Weimar silent film era career including assisting on Richard Oswald’s Dreyfus (1930) and Max Ophüls’ Die Verkaufte Braut (1932). He worked as the German language version Producer of Hitchcock’s Murder (1930) in London, on Rene Clair’s French classic Sous les Toits de Paris (1930), as Producer of the German version of Charlie Chaplin’s City Lights (1930), and for dramaturgical collaboration on Phil Jutzi’s classic early sound film Berlin Alexanderplatz (1931). By the time Nazis came to power and he was offered the role of Producer of Hitlerjunge Quex, he had already worked on 49 other films.

The first-ever  English language biography on Ritter, entitled Karl Ritter - His Life and Zeitfilms Under National Socialism, has been published in early 2012 by germanfilms.net and includes the english translation of Kurt Höllger's 1940 biographical sketch, a chronology of Ritter's life through to the collapse of the Third Reich, a filmography, as well as 24 B&W photos and 16 full–colour poster reproductions. The book contains  the first–ever excerpts of Karl Ritter's unpublished account of his thrilling escape  in April 1945 from a Siberia–bound Soviet transport of German POWs and his incredibly dangerous 24 day ordeal in safely returning to his family in Lower Bavaria.

The book has been assigned ISBN # 0–98086 12–1–7. The book draws on research from the Bundesarchiv, the Berliner Kinemathek, Potsdam‘s Wolf Hochschule für Film und Fernsehen, Ritter's private diaries, film studio archives, from the Gillespie Collection library, as well as unpublished sources both in Germany and in Argentina. 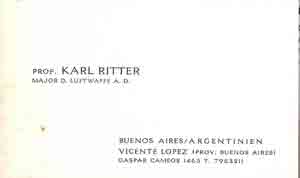 Ritter's visiting card after emigration to Argentina. The dwelling is no longer owned by his descendents.

The film  comedy Capriccio starring Lillian Harvey in travesti was a film loathed by Joseph Goebbels, who had it re–edited and mangled before it premiered.  This film brought about the first serious rift between the Propaganda Minister and Ritter. But despite his efforts, the public and critics loved the footage that remained. It is probably the most curious and uncharacteristic film made by Karl Ritter, although his sense of humour and love of comedy and light–hearted fun–filled movies is apparent when reading the biography on him.  The Gillespie  Collection has his personal newspaper clippings album covering Capriccio. with reviews from all across the Reich, Europe, Japan and elsewhere. It has been used subsequently for an academic chapter on the film which was published in 2014. The album is shown here -- 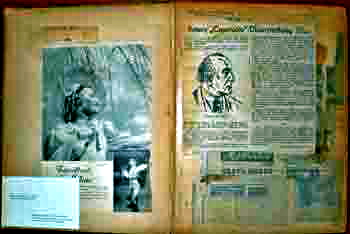 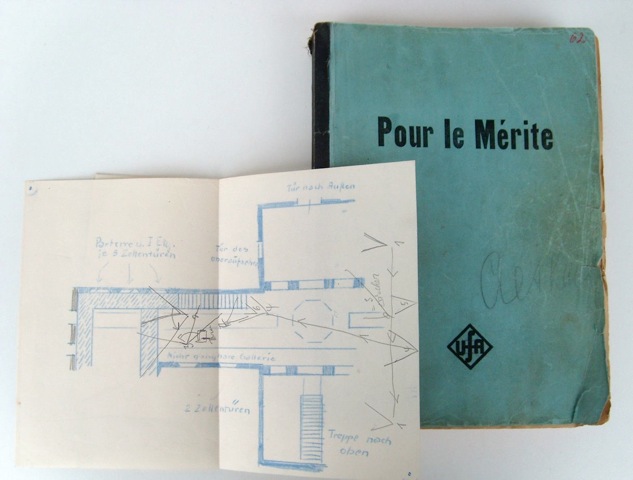