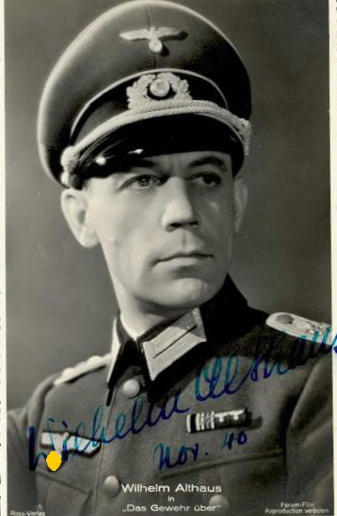 Wilhelm Althaus was an actor whose career started in 1938 with an appearance in the film Magda, which was uncredited. He then appeared in nine German films from 1938 through to 1942. The propaganda films included Pour le Mérite, Das Gewehr über, Wunschkonzert, Blutbrüderschaft  and Die große Liebe. Althaus played soldiers in all of these films. Our poster gallery has all these particular posters.

Althaus re–surfaced after the war, appearing in one motion picture in 1952 and one TV drama in 1967.  Althaus' actual birthdate and death date are unknown to us, but he played an important role in the origin of some of the best of our Karl Ritter Pour le Mérite materials.

Below, Althaus in the film. 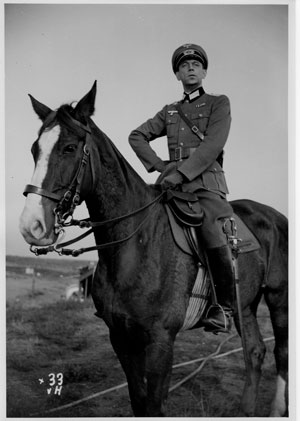 Many years ago a film collector in Germany offered us three dozen press photos from Karl Ritter's 1938 propaganda film, Pour le Mérite. These originals were not easy to come by. 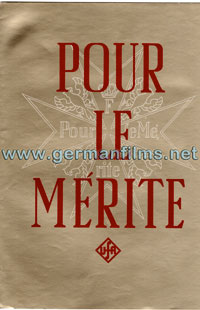 Additionally, the collector offered us the original Uƒa studio invitation to the film's premiere at the Berlin Uƒa Palast am Zoo, shown below right.  We added these to our archive.  The press photos and the Uƒa invitation came from Althaus' estate. No other items were available, his estate obviously scattered to the winds. These purchases spurred us on to seek further original materials from this important and highly popular film. (The net profits to Uƒa from Ritter's film exceeded those two years later from the infamous Harlan film, Jud Süß, for example.)

Fast–forward some years and we were then able to acquire the Uƒa studio's advertising brochure aimed at German cinema owners, offering them huge B&W billboard hoardings for Pour le Mérite which they could rent (!) and use across their foyers.  This poster panel was a huge 4 ft. x 8 1/4 ft. display. (This item did not come from the Althaus estate.)

A year later, we were then offered an original Uƒa studio sterling silver souvenir from the Pour le Mérite production – a small silver cup with a "Pour le Mérite" gold emblem on the front, and the engraved words "Uƒa Film 1938" on the back; along with its original presentation box. We snapped it up at auction. (This item may or may not have come from Althaus' estate, but only a handful of such cups were manufactured for Uƒa studios and they were given to cast members only.)

At auction more recently  we won Wilhelm Althaus' personal script of Pour le Mérite with his name written across the right side of the cover. The script book contained the floor plan of the military prison scene –  one of the scenes in which Althaus was appearing. Photo of the script and prison floor plan, below. 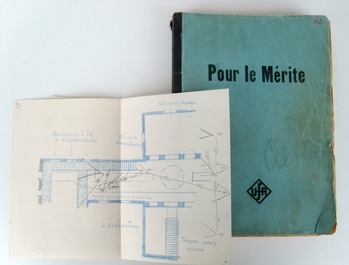 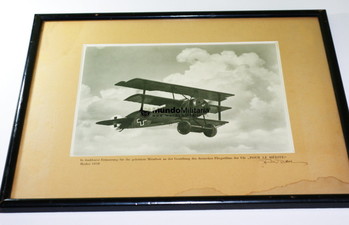 In  early 2016 we found on a militaris website the framed, matted photo of a WWI era Fokker bi–plane, with an inscription printed on it, and signed in ink pen by Director Karl Ritter, to commemmorate the construction of the aircarft for his film Pour le Mérite. The inscription on the matt board reads:

In grateful remembrance for the work contributing to the design of the German air film POUR LE MERITE, Autumn 1938  (signed)  Karl Ritter.

Finally, we found the signed film star card of Wilhlem Althaus from the military film Das Gewehr über (at the top of this page, left). This card, the film script, and the film press photos plus Uƒa invitation were all found over ten years apart, from three different sources. Vale Wilhelm Althaus!

To see our original movie poster from Pour le Mérite, click here. The poster is from Fascist Italy 1938/39, in Italian. The film was hugely popular there.