This page shall be updated regularly as any especially important or novel new film acquisitions are made in the course of the year. Stay tuned.

Our first acquisition is this 1944 film advertisement for the premiere of the film  Junge Adler  at the prestigious Ufa cinema palace in Prague. 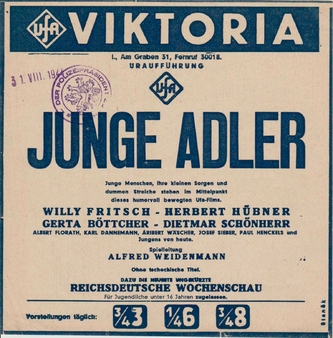 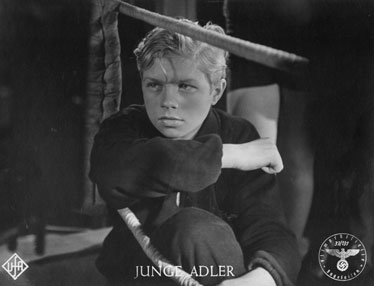 No film poster of Junge Adler was printed –– this confirmed by the Ufa handbill which you can find in our Poster Gallery under the film title -- but we do have 27 lobby cards and 5 press photos, as well as the film's press-book in our Collection, all of which we have scanned and made available to International Historic  Films in Chicago for their forthcoming 2020 DVD release; which will be remastered from an original 35mm print for top quality.

This piece of ephemera relates to the film Das Gewehr über!  It is a small handbill which folded in half represents a soldier at his watch post, then opens up to a description and advertisement for the film.  Die-cut film advertising was not as common in the war years as previously. 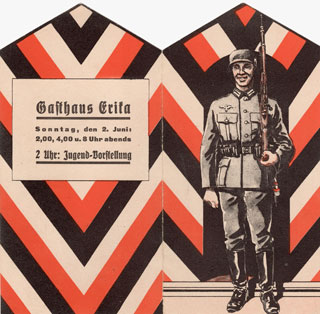 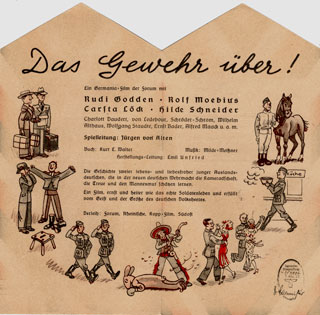 We have acquired three original press photos of the "crimes against humanity"  trial of Veit Harlan in Hamburg, 1949, for his Jud Süß. The first photo is inside the court room, the second photo inside the Esplanade-Cinema in Hamburg where the court screened both Harlan's Jud Süß as well as Hippler's Der ewige Jude films for the judges and trial participants and observers;  and the third photo shows him and well–wishers celebrating his acquittal, including hoisting him on their shoulders outside the court house. Very rare historically important originals!

News Flash! The second photo described above is under consideration to be book cover illustration of a new English–language book on Veit Harlan currently being written. The author of the book has been in touch with us as to this development, once the photo was known to him. 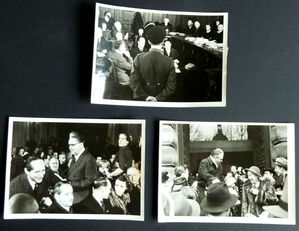 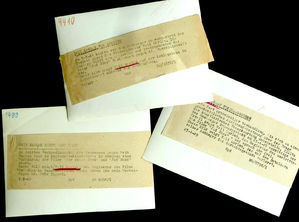 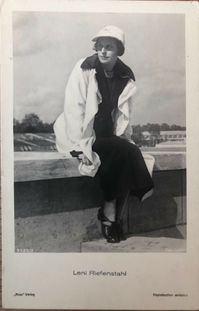 This very scarce Ross card for Olympia shows film director Leni Riefenstahl in a pose during the film–shoot. This card is a variation to her  better-known portrait cards issued for the film at the time; which we also have in our card collection. We are pleased to have found it.

This cinema pass was issued to German soldiers during their visit to Venice, 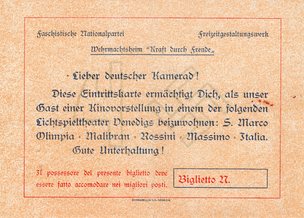 Italy during WWII. It offers the soldiers free admission to any one of six movie theatres in Venice, as guests of the Italian Fascist Party in partnership with the "Strength through Joy" travel and hospitality organisation of the Third Reich operated by the Reich Labor Service. This rarely–seen  movie pass now part of our collection of German film ephemera.

After starting the new year with a number of rare and interesting "small" film items, we are pleased to announce that we have won at auction two outstanding Italian film posters of German propaganda films –– those for Kampfgeschwader Lützow and for Ein Robinson. Heretofore we have refrained from announcing or listing posters until they are safely in our hands. However, as it shall be July before we are able to receive these two posters, we are breaking our own rules to share them with you here. 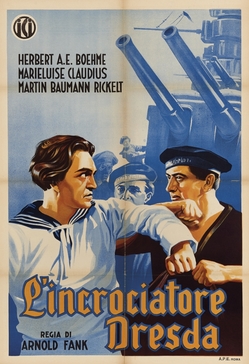 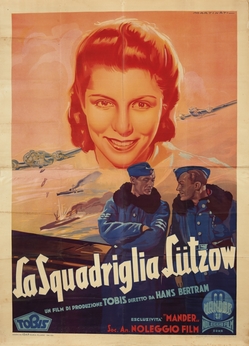 Ein Robinson was directed by Arnold Fanck, famous for his silent "mountain films" starring Luis Trenker and Leni Riefenstahl, and then later for the first–ever co–production between Germany and Japan with The Daughter of the Samurai. We own two original German posters for Ein Robinson, so are very pleased to add this Italian poster to the Collection.

We also own both German posters and the Italian "Fotobusta" for the Luftwaffe film Kampfgeschwader Lützow,  so having this beautiful large (200 cm X 140 cm) Italian poster to expand our Collection is a fantastic acquisition. Lützow was the sequel to DII88  –– and we own all three DII88 original German posters! We will add these images to our Poster Gallery after we have the posters here to re–photograph. These nice images, in the meanwhile,  are from the auction house catalogue.

We have acquired 29 lobby cards from the films Sieg im Westen, Karl Ritter's Verräter, and from the German Navy feature films Kameraden am See and U-Boote-Westwärts!. Photographs from these films are hard to find. We show here one from each film. Although the scanner was too small to capture the entire lobby card, these scenes are representative of the photographs acquired for our Collection.  To see our inventory of German original film stills, please click here.  The inventory list only shows films with 10 or more stills and/or press photos in our Collection. We also have some hundreds of stills from other key films but there only a handful or less than ten photographs for each of those films.

With the new Sieg im Westen lobby cards added to those which are already in our Collection, we now have 26  lobby cards from this important film, as well as the ultra–rare, perhaps only surviving Gaufilmstelle poster in the world. The poster was drawn by graphic artist Mjölnir, who also designed one of the infamous Der ewige Jude posters in our Collection. We thus have both of Mjölnir's film posters. He did no others, but is famous for his many NSDAP and wartime propaganda posters, including those at war's end for the Volksturm. 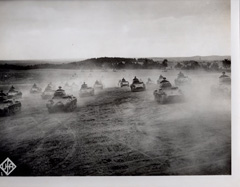 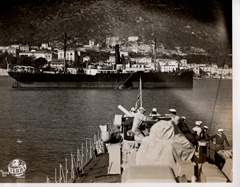 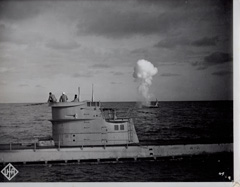 We have won at auction in Berlin the:

We have found Herr Jacobi listed as a Motion Picture Cameraman in our 1943 Film Almanach Guide published by the Reichsfilmkammer/Reich Film Chamber: 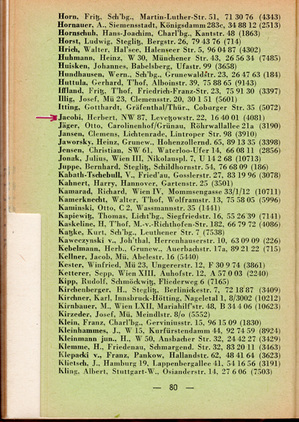 The description of this Lot also mentions the film director Ernst Munch. Munch worked for ZFO in the Ukraine producing short agricultural films, such as Die Neue Ordnung and Die Nutzung des Hoflandes. This "New Order in agriculture" was promoted by Nazi Ideologe and Minister of the Occupied Eastern Territories, Alfred Rosenberg. It abolished the hated Bolshevik collective farms and returned the land to the farmers.  The propaganda appeal of this policy was to be widely promoted via this series of ZFO films, produced by Rex-Film in Berlin for the ZFO. (Rex-Film is also mentioned in this Jacobi documentation.)

Munch was also meant to be involved with a dozen planned film shorts on agriculture, of which only five films were completed by January 1944. Prior to WWII,  he was the A.D. on the feature film Familie Schimek (1935) and had acted in two other feature films in that year. After WWII, Munch apparently resumed making agricultural films in the BRD, despite his ZFO involvement. He is listed in the BFI data base as having made three such films in 1953, titled Aktuelle Landwirtschafliche Filmschau Nr. 6 and Aktuelle Landwirtschafliche Filmschau Nr.7, and a film entitled Ein Dorf spielt mit.

This is a most intriguing and exciting addition to the materials we have in our ZFO /Ostland Film archive.  Such material on the anti–Bolshevik filmmaking of the Third Reich inside the Occupied USSR between 1941 and late 1944 is exceeding rare and virtually impossible to find. We shall take possession of this material after postal delivery between Germany and Ausralia disrupted by the coronavirus pandemic is recommenced and we shall add the most valuable and interesting items to our  ZFO / Ostland Film GmbH page then. 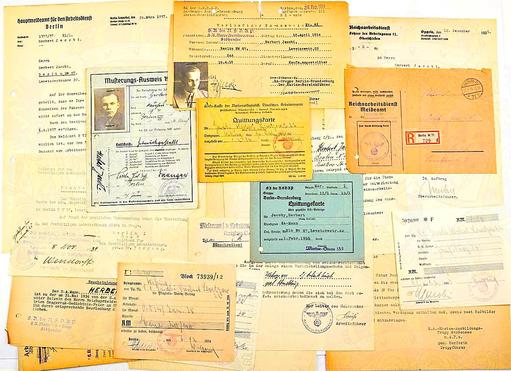 We have won in late February and mid-March at auction two German film posters which are pending shipment to us whilst the coronavirus disrupts international postal deliveries. 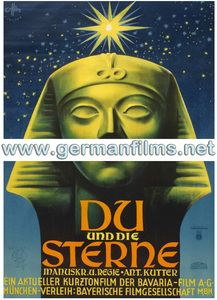 The first poster is for the 1933 documentary film short, Du und die Sterne, produced and directed by Anton Kutter. He was a renowned documentary filmmaker, astrologer, and inventor of revolutionary lenses for telescopes. There is a telescope named after him. He  scripted and produced the unfinished 1937  German sci-fi film Weltraumschiff 1 startet... of which only a fragment exists today. For it's day, the film  exhibits wonderful trick–photography and special effects. See an image below RIGHT. Lithographic posters for short films was not so common in Germany, 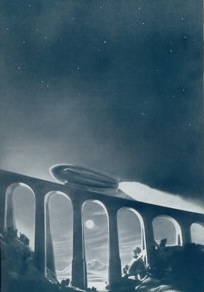 so this poster is quite a collector's item and of interest not only to German film collectors but also to the many astrology fans of Anton Kutter; who hold him in high regard. The poster looks to be in excellent condition. 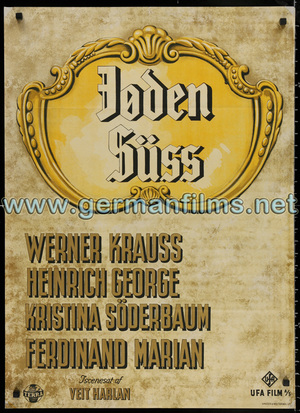 Harlan film, Jud Süß. It is DIN A1 sized (24.5 inches X 33.5 inches) and shows both the Terra Filmkunst and the Ufa logos, just as our French and Hungarian posters do.  Although the poster does not have any painted or photo–montaged graphic art on it, it is nonetheless an attractive poster with rich and deep colours. Note that actors Werner Krauss and Heinrich George are listed as the first two artists, not Ferdinand Marian or Krista Søderbaum. Both men were revered film stars across Europe for their silent and sound films, and very well-known to non-German audiences. This is the eighth poster for the Harlan film we have acquired over the past thirty years. The other seven Jud Süß posters can be found in our Poster Gallery above and this 8th one will join them as soon as it is received and re–photographed.

Once both posters are safely in our hands, we will re–photograph them for our Poster Gallery.

Our library has many hundreds of issues from this important Third Reich era film newspaper –– it was the Variety of its day -- the official daily film publication for the industry. But we have in fact only 92 issues for the years 1933–1939; which includes zero issues from 1933 and only one for 1936. This bundle of papers contains 38 issues from 1933, two issues each for 1936 and 1938, and then 35 issues for 1939. Their shippment has been delayed due to the coronavirus disruption of international freight. We do look forward to examining them for interesting articles in our neverending research efforts to enhance and expand our knowledge of Third Reich film.