It did not take long for us to celebrate the start of hopefully a far healthier and more positive New Year. We have been offered privately and acquired this November 1942 film poster for the Splendid-Palace cinema in Riga, Latvia advertising the 1941 anti-modern art German propaganda film Venus vor Gericht (Venus on Trial), and the comedy Du und Ich (You and Me). 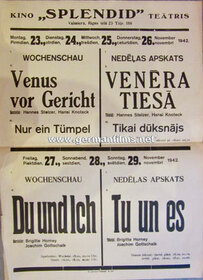 We have three original posters for this 1942 film, which we consider amongst the top war films produced by Mussolini Italy. Our Poster Gallery also shows all of the Fotobustas for Giarabub which we have. 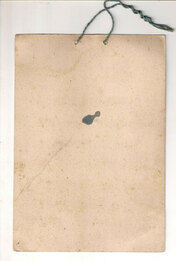 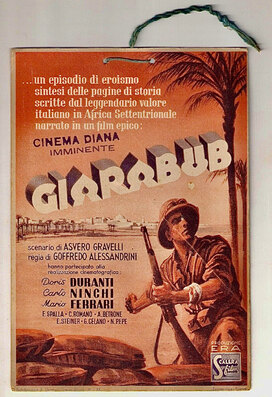 We announce here some private photos taken during the film–shoot of Karl Ritter's Luftwaffe film BESATZUNG DORA in the USSR in October 1942.  They are in a Wehrmacht soldier's album, unlabelled, which we acquired in September 2018 in Berlin at auction. We had been misled as to their relevance because the auction listing attributed the few photographs in the album to Ritter's Stukas film of 1941. This auction took place 9 weeks after we discovered the long–lost film script for Karl Ritter's Legion Condor feature film. We became totally focused on researching, writing and publishing our new book on that film, and this photo album was put on the proverbial back–burner.

Anything to do with the banned Luftwaffe film "Dora" is exciting to us, although these photos, even had they been known at the time of purchase, would have missed our THE MAKING OF THE CREW OF THE DORA book#s publishing deadline by more than two years.

Nonetheless, we are pleased to show some of them here for the first time:

Here is a candid photo of soldiers making the signage to be used in the FEINDFLUG ceremony scene, spreading the materials out along the train tracks: 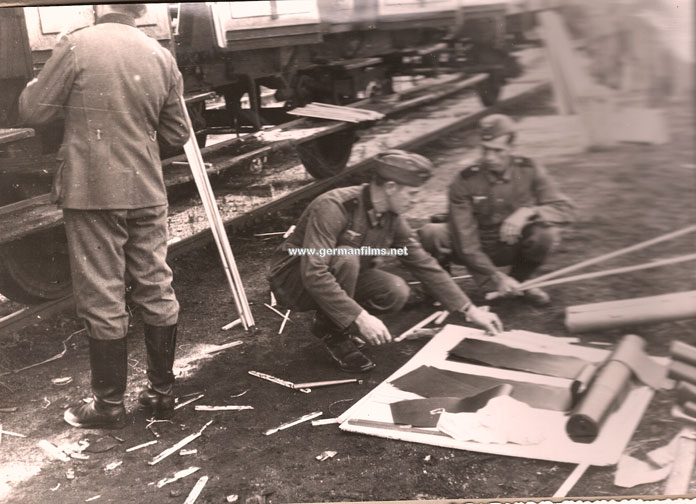 Here is the scene with film actors and actual Luftwaffe personnel and air crews before the filming (note the deckle edged snapshot photo taken from the album): 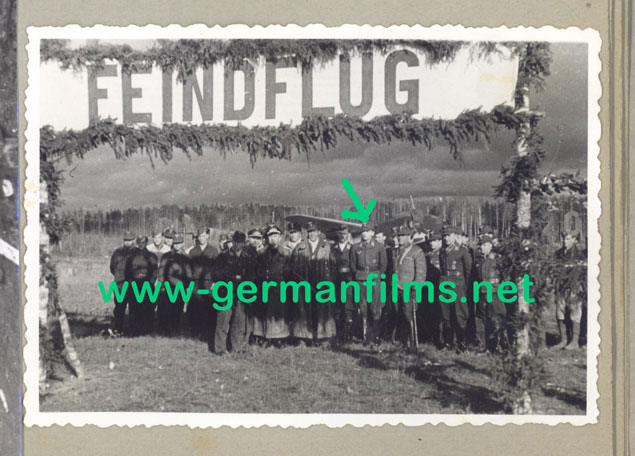 And here is the film scene as represented in the Ufa lobby card: 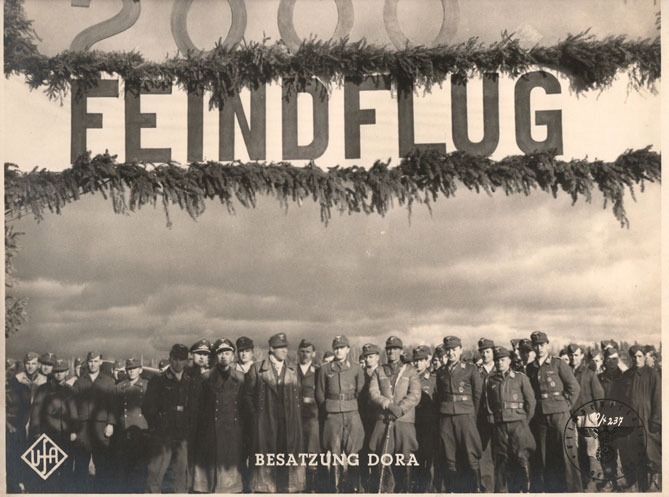 Here a candid shot of actor Joseph Dahmen 'conducting' in the Officer's Mess at the Gostkino Fliegerhorst in the Soviet Union, with soldiers looking on. The man at the extreme left of the photo in civilian clothes is Gottfried Ritter, Assistant Director to Karl Ritter, and his youngest son. 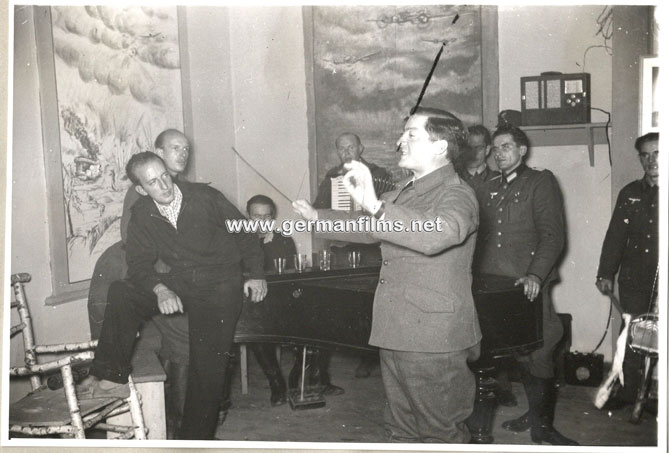 The Ufa camera crew (Gottfried Ritter at left) in the muddy road of the Soviet village on the outskirts of the Gostkino air base: 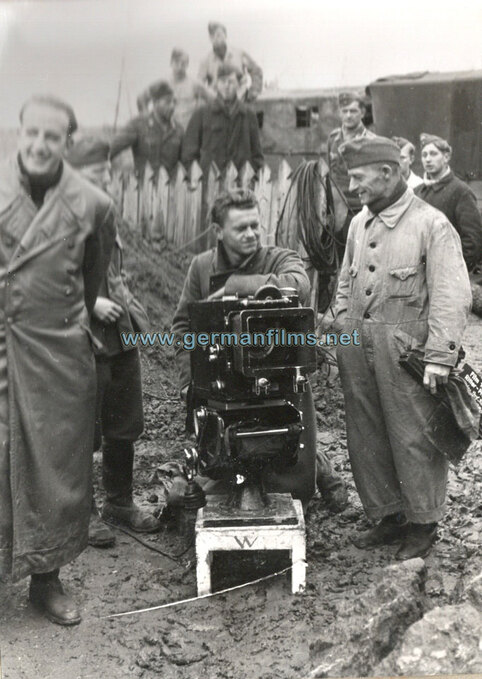 The final album photo is that of Karl Ritter, in Luftwaffe uniform, arriving at the filming location in his car. Note the Ufa 35mm motion picture camera in a weather-proof shroud. This is the first time this image has been published, along with the above photos. 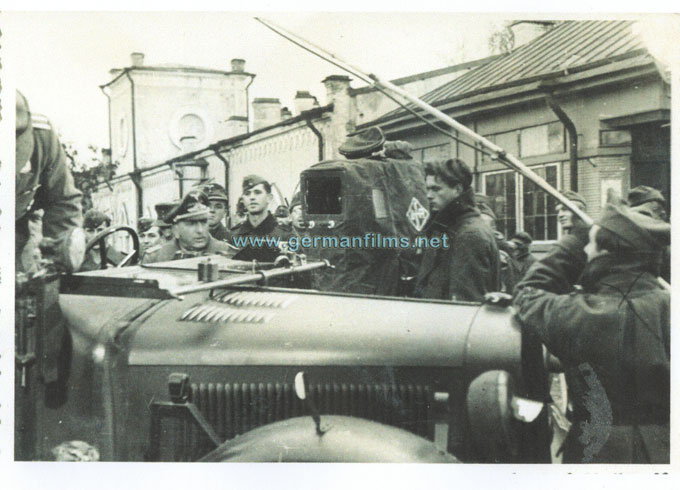 The KDDK; or Comradeship of German Artists was founded under the auspices of Dr. Joseph Goebbels, and on October 31, 1934, opened it's Berlin offices and lavish premises, with restaurant, bar, 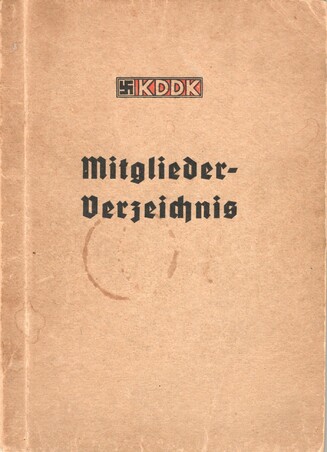 meeting rooms, cinema and other facilities in a family villa of the assassinated Weimar Minister Walter Rathenau.

The KDDK club had artists and their family members from across all art forms, from film to the visual arts. Film director Karl Ritter and his wife and their oldest son, Heinz, were members.

We have obtained the very rare 1940 membership directory to the KDDK. Below you can see the names of Karl, Erika and Heinz Ritter as members, alongside the date of their acceptance into the Association. Note Leni Riefenstahl's name,  as well as those of other film stars and prominent artists. 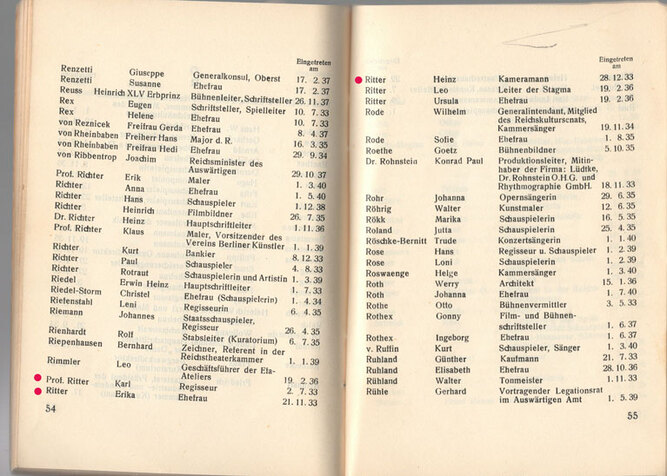 The Im Kampf gegen den Weltfeind cinema chain poster and the cinema owner's guide to the film (Werberatschlag) have now arrived safely Down Under. Also in the same package, the extraordinarily rare 'Das Programm von Heute' for the first Leni Riefenstahl Party Day film, the banned Der Sieg des Glaubens, with artist card. This order took 65 days to reach us and we were not actually sure that it had not been lost in the COVID-affected overseas postal service! 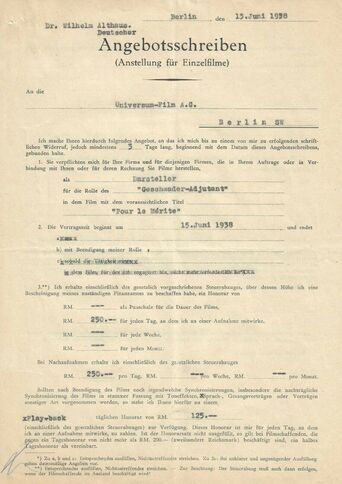 we have over the years won at auction scattered items from the estate of one of the character actors who appeared in the film as a WWI officer, Wilhelm Althaus.  Items include his invitation to the film's premiere at the Ufa-Palast-am-Zoo on 28 December 1938, some lobby cards, an autographed postcard of him in the film, and also his personal copy of the actual Ufa film script. Today we have won his one sheet two-sided Ufa contract to appear in the film. Such contracts are rarely on the market, and being Pour le Mérite,  we just had to have it. The seller's image of the front page is shown at right. 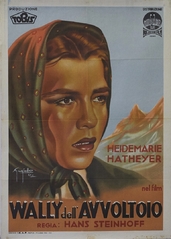 Given COVID postal service disruption to Australia and also heritage export certification from the Italian government now required for such purchases, we have just received the posters safely Down Under.

We show here the Italian poster, 60 cm X 80 cm, for Hans Steinhoff's Die Geierwally. It and the other two posters have now been added to our Poster Gallery.

On the heels of acquring both the cinema owner's promotion guide to Ritter's Im Kampf gegen den Weltfeind, and a Berlin cinema chain poster for that film, a friendly collector alerted us to a cinema handbill on the film for sale on a militaria website. We snapped it up, too. 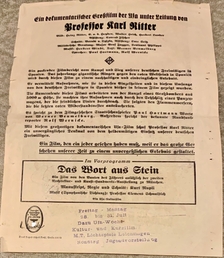 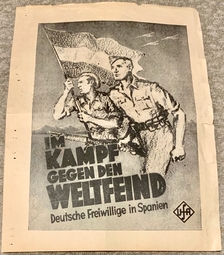 Although it is not an item associated with a German film, it is one which relates to our most recent book Legion Condor – Karl Ritter's lost 1939 feature film. We have won at auction an extremely rare original envelope and a two-page letter, fully intact, posted on 31 January 1939 by a Condor Legion airman in Spain to his wife or girlfriend back in Germany. The secrecy 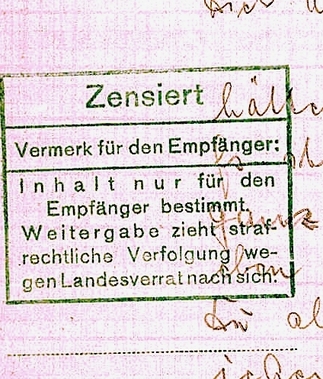 of the role of German airmen in the battle for a non–Communist Spain was maintained by the use of a cover name and address for all correspondence. This intriguing story is told in our book as a prelude to the making of the hard-hitting anti-Red feature film by Karl Ritter. Such empty Legion Condor envelopes come to the market perhaps once every five years or so, but none we have seen heretofore have also contained the airman's  correspondence posted in such an envelope. The letter therefore also provides us with the censorship rubber–stamp, warning that the "contents are intended for the recipient only --  any reproduction will entail criminal prosecution for treason."   The airman writing says in the letter that although they have " had some heavy fighting" he does ask her not to worry too much  ("kein große Angst") about him.

A nice complementary piece of authentic history added to our Collection.

Film Ephemera out of actor Wilhelm Althaus' estate continues to interest us and we recently acquired his Ufa film contract to appear in the feature film Drei Unteroffiziere, for which we have the original poster in our Poster Gallery, as well as film stills and promotional material -- such as the 'Werberatschlag' or cinema owner's promotional guide to the film published by the film studio. The Ufa contract came with two stills of him in the film.

We also obtained a nice large portrait studio photo of him in his WWI officer's uniform for the Karl Ritter film Pour le Mérite and a Völkischer Beobachter full–page newspaper article on the film, published 16 days before the film's world premiere in Berlin at the top Ufa Palast am Zoo movie palace. 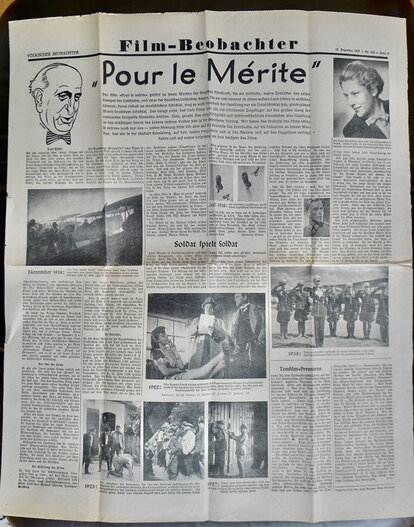 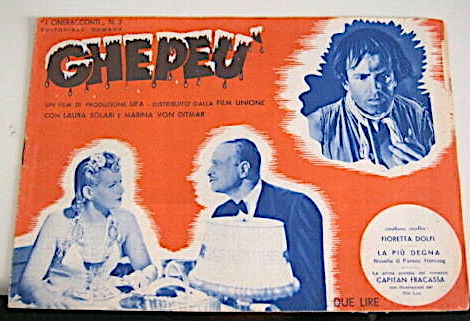 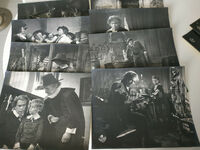 We have acquired from a seller in Ukraine seventeen double-weight lobby cards for the Hans Steinhoff biopic Rembrandt.  The seller claims that his supply of original NS film stills were left behind by the Germans in WWII -- a very believable story.  These bring our Rembrandt film stills to 25 lobby cards and one press photo.