An excerpt of the book's review from the prestigious HISTORICAL JOURNAL OF FILM, RADIO & TELEVISION (Nr.2, 2020) 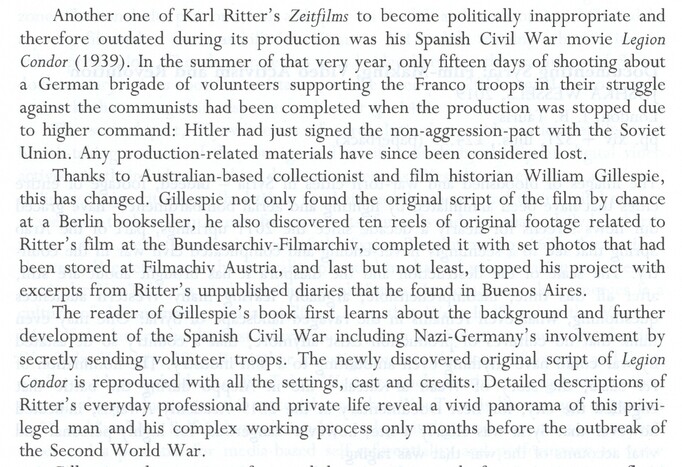 Gillespie rather presents facts and documents instead of questioning or reflecting on them. He counts upon the historic evidence and has it speak for itself rather than interpreting it. Regarding the topic and period of the book, this might cause some readers irritation due to the author’s lack of taking a clear position against his subject, thus glorifying it; which, of course, is not intended.

Gillespie’s book is not a critical, and even less, an academic survey, but rather a compilation of authentic sources with detailed explanations of the large number of personnel that were involved in the production as well as explications of historic context, being thus a perfect basis for any further scientific work.

With his books Karl Ritter. His Life and ‘Zeitfilms’ under National Socialism (2012), The Making of the Crew of the Dora (2016) and now Legion Condor (2019), Gillespie has made an essential contribution about a contaminated and rather unpopular but no less revealing chapter of German film history.

"A great book." -- from a film historian in Austria.

"  THANK YOU VERY MUCH FOR SENDING ME YOUR WORK ON LEGION CONDOR. I HAVE READ IT COVER TO COVER AND LEARNED A GREAT DEAL  ALL THE BEST WISHES FOR YOUR FUTURE RESEARCH, " – from a retired Professor Emeritus in the USA, who has books in print on NS wartime propaganda.

From a well–respected German film historian and producer of documentary films on National Socialist film history and cinema:

Returning from the Easter holiday, I found the book. Many thanks, and I am looking forward to an exciting and knowledgeable reading!  Best regards....

And from a US book seller and publisher:

From an American author whose own book on Third Reich film was published earlier this year:

Congratulations on your own new book! What an accomplishment to write a whole book and publish on such important new finds so quickly! You certainly deserve time to rest and enjoy. You are doing a phenomenal job making Ritter’s films and career accessible to other historians. This is a very valuable contribution.

And from another German film historian and author:

I have read your book (again, congratulations) and prepared my review which I will write down as soon as I get the confirmation from the editors that they will publish it.

From a senior staff member at a major German film institute:

Congratulation to your fascinating work.... which is a interesting case study indeed.

From a well–known expert, film historian  and author of books in Spain on German films and newsreels about the Spanish Civil War:

Last week I received your book about Ritter’s film Legion Condor. I appreciate very sincerely your kindness and the shipment. The documentary recovery work that you have made is very valuable for the history of cinema and for the history of my country. I want to write an article about Ritter’s films related with the war in Spain. The book you have sent me will be fundamental in that work. I congratulate you for your work, for your collection of materials and I am at your disposal to share information and historiographical interests.

And from an American "Ivy League" film historian, professor and author of many books and articles on German film:

"And I very much appreciate the careful work you have done on Karl Ritter, a director whose films deserve the painstaking attention that you have granted them. Just last week I received the copy of the Legion Condor book that I had ordered and very much look forward to reading it."

These comments from Germans, from Austria, from Spain, and from America about the book are unedited and unsolicited – and received with heartfelt thanks.  We have removed the names from these messages as the area of National Socialist film remains a controversial and sensitive topic,  and we wish to protect these professors and authors from any negative blow–back.

The book is now for sale  from this website for €30 ppd. via International Airmail. Australian Customers will receive a refund of  AUD$15 after they pay  €30 for the book using our order form on this website, due to the savings in postage incurred for their order.

The book is now for sale in the USA from International Historic Films, Chicago, via their new print catalogue and their website. They have now received an initial order for sixty–eight copies of the book in stock and they believe that it will be a good seller.

Copies of the book have been given to the Federal German film Archives Library, to the Berlin Film Museum Library, to the Filmarchiv Austria, and to the Institut für Zeitgeschichte in Munich in exchange for permission to use their libraries and archives for some of the book's research and/or photographs. A copy has also been donated to the National Spanish Film Archive Library in Madrid, given the interest in all films to do with the Spanish Civil War. 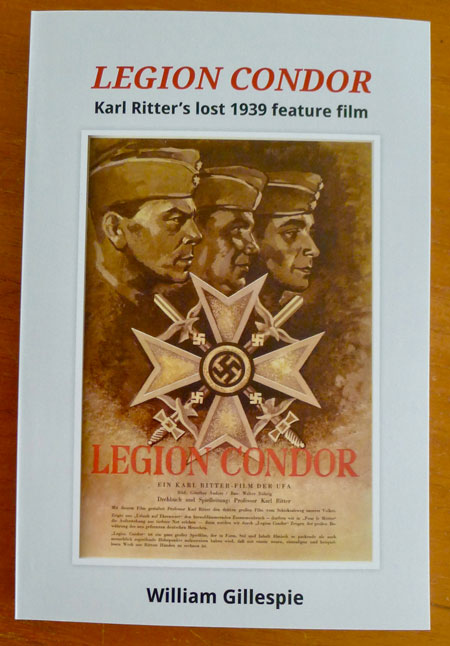